URBANDALE, Iowa---A building project that began in 2003 came to a debt-free conclusion with a mortgage burning at Urbandale Baptist Church. 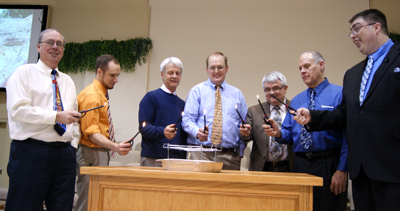 URBANDALE, Iowa—A building project that began in 2003 came to a debt-free conclusion with a mortgage burning at Urbandale Baptist Church on the first Sunday of April.

Pastor Nathan Gast says God showed “His abundant hand of provision over the past 10 years” and allowed the church to pay its final balance on a $1.8 million mortgage at the end of December 2013. Urbandale Baptist Church began meeting in its newly completed building on April 4, 2004, “so it seemed fitting that the celebration should take place that same weekend anniversary in commemoration of all that had taken place over the past decade,” he says.

Gast and the congregation celebrated by enjoying lunch together, reading aloud the church covenant, and taking part in a responsive reading that was first read in 1978 when the original building and parsonage mortgages were paid off and the building dedicated to the Lord.

Pastor Richard Dayton, who retired in December 2012, and the five deacons of Urbandale Baptist joined Pastor Gast in lighting the fire. While the mortgage burned, the congregation sang “To God Be the Glory.”

The church now plans to build a classroom addition and a new worship center to its existing building.

Pastor Gast says, “Only with God’s provision and faithfulness have we seen what God has accomplished thus far, and we look with anticipation into what God is going to do in the future.”