Madagascar and South Africa aren’t all that far apart geographically, but for Daniel Comings, they were like separate continents. Comings, associate pastor of Fellowship Baptist Church, visited both countries as part of Fellowship’s summer missions team ministry. 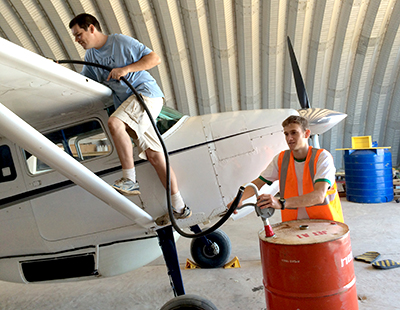 LAKELAND, Fla.—Madagascar and South Africa aren’t all that far apart geographically, but for Daniel Comings, they were like separate continents. Comings, associate pastor of Fellowship Baptist Church, visited both countries as part of Fellowship’s summer missions team ministry. The church’s goal was to be an encouragement in any way possible to their missionaries Marc and Nancy Blackwell in South Africa and Richard and Charity Jertberg in Madagascar.

The trip began with five FOCUS (Fellowship of Christians United in Service) team members heading to South Africa. During their two Sundays there the team worshiped and interacted with three congregations: Community Baptist Church, Swartland Baptist, and Grace Baptist, with Comings speaking at each location. “It’s always fun to worship with the people of God in different cultures,” he says. A bonus: they were able to speak English with the people they met.

During the weekday afternoons, the team ran Bible clubs. On Wednesday evening they participated in a home Bible study; Friday morning, in the chapel of a Christian school; and Friday evening, in a multichurch youth rally. Ten days later, three of the team were on their way home, while Comings and one of the teens, Stephen, went on to Madagascar.

Comings contrasts the countries as “first world South Africa” and “third world Madagascar.” Immersed in the Jertbergs’ lives, he and Stephen helped with some of the seemingly mundane tasks of missionary life and with some of the more unusual ones, like fueling and packing the missionaries’ plane. They observed, and Stephen spoke at, a soccer tournament organized as an outreach opportunity by the local church. The two Floridians interacted with the youth as best they could now that there was a language barrier. They also rode along with the Jertbergs and members of the congregation to deliver supplies to remote villages at the end of what Comings describes as “unbelievably rough roads (national highways!).” He taught from God’s Word at the local church, as well as in a small group in one of those remote villages. He and Stephen also ate zebu (humped cattle), which he calls, “tasty, tasty zebu.”

Comings says that getting the most out of a missions trip requires a humble, learning spirit, “asking questions, worshiping with churches and congregations, seeing what the missionaries see, eating what missionaries eat, and getting a feel for the culture(s) the missionaries interact with on a day-to-day basis and taking a genuine interest in each aspect. Suddenly the prayer letters that missionaries send become very . . . real.”