Church and Community Honor Pastor for 20 Years of Service

On Aug. 24, Pastor Richard C. Piatt II of Fellowship Baptist Church did not know who would be preaching in the morning service. That mystery began a morning of honoring him for 20 years of service. 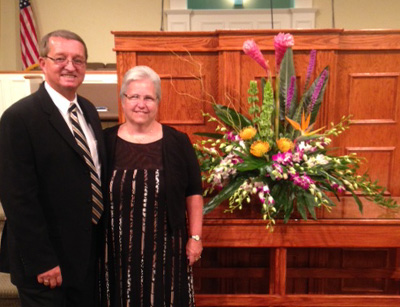 LAKELAND, Fla.—On Aug. 24, Pastor Richard C. Piatt II of Fellowship Baptist Church did not know who would be preaching in the morning service. Five days earlier, the deacons had told him not to come to church for the rest of the week. The chairman said to just show up and dress decently on Sunday and joked, “Do not embarrass us.” It was all part of celebrating Pastor and Susan Piatt’s 20 years at the church.

That Sunday morning began with two deacons, John Shelburne and Ben Mulaparthi, teaching a combined adult Sunday School class on “The Five Solas of the Reformation.” “It was great!” says Piatt. “The morning service was full of God-honoring music, both congregational and specials. I wept several times.” Dr. Donald Sweeting, president of Reformed Theological Seminary in Orlando, where Piatt had received a doctorate, then preached on the sovereignty of God from the book of Jonah.

After the service, as the congregation was being dismissed, they were told there was a full-grown tiger in the parking lot—“one of my friends,” says Piatt. Pastor Piatt is known in the GARBC as a man who loves all animals, especially reptiles. He and his various “friends” have attended GARBC conferences and have been featured in several Baptist Bulletin articles over the years.

Following the morning service, the congregation enjoyed a catered meal and a few “musical specials.” Elvis sang, “You Ain’t Nothin’ but a Hound Dog” and then a “theological song” full of bad theology. Piatt was presented a letter from Florida Gov. Rick Scott and a poem from the church’s resident poet, Don Hubbard. The program included insertions of the pastor’s “Piatt-isms,” such as “hapax legomenon” (a word or form occurring once and only once in a document or corpus), “really,” “wowie zowie,” “gag a maggot off a gut wagon,” and “but what does the Bible say?” In response to this, Piatt says, “Well, I at least I know they are listening to me.”

He and Susan also received many cards and gifts, for which they are grateful. The climax, says Piatt, was the church’s gift of a Ligonier Study Cruise to the Caribbean with Reformed theologian R. C. Sproul. Piatt says, “Susan and I went home, read out loud all of the cards, then fell exhausted into our recliners, and fell to sleep. WHAT A CELEBRATION! (I asked if we could do it again next week. All said NO!)”

A couple of weeks later, after giving the invocation at Lakeland’s commissioners meeting on Sept. 2, Piatt was prepared to leave when the mayor called him to the front and presented him with a key to the City of Lakeland for his 20 years of service in the city’s faith community. Piatt was, he says, humbled and shocked, “and I could not stop smiling!” He gives God alone the glory for what He has accomplished during the past 20 years.