Teens all over the state of Ohio were saturated in God's Word, fellowship, and worship at the Saturate youth rally. 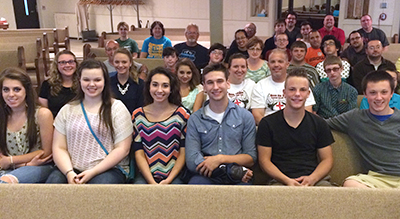 Each location addressed the same main theme: “Homefront.” “We chose this theme so that we could encourage all students in attendance to realize that God has them exactly where they are for a unique and divine purpose,” says Aaron Hedges, youth pastor at Temple Baptist Church. “So rather than simply biding their time until they can move on with their life elsewhere, we challenged them to start serving the Lord and doing great things for Him right now where God has them. They’ve each been given their family, school, church, and community for a reason—to serve Him!”

A band called The Marty Ford Experience led students in worship. The band says they offer “its audiences a time of worship that is genuine and full of energy, but that most importantly succeeds in bringing the body of Christ together in one song to the Lord.”

This is the second year the event has been held at multiple sites, and that approach seems to be working. Last year attendance ran about 400. In previous years, when the event was held in a single location, about 100 people attended the largest rally. Going multisite has quadrupled that number.

The goal is not only increased attendance, Hedges says. “Our ultimate objective as a committee is to provide events like these at an affordable cost and relatively short driving distance. With our five locations this year, no church in the state was asked to drive more than 90 minutes or pay more than $15. The price of admission included the event, a meal, and a T-shirt no matter which location a church may have chosen.”

The Ohio State Youth Committee is now planning for next year’s rally and hopes to have at least five locations again, if not one or two more.