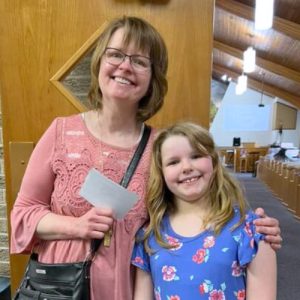 FOSTORIA, Ohio—Ohio Women for Missions is praising God for a great day and good attendance at its spring meeting. Fostoria Baptist Church hosted the meeting April 23.

OWM, a ministry of the Ohio Association of Regular Baptist Churches, exists to support, pray for, and promote missions. Each year the women adopt a missions project to raise funds for, but this year’s project has been ongoing since 2020. The women have been raising funds for three Ohio camps that are part of the National Association of Regular Baptist Camps: Camp Patmos, Skyview Ranch, and Scioto Hills Christian Camp and Retreat Center.

The women were happy to learn that they exceeded their goal of raising $15,000.

Camps have faced difficult times since the pandemic began. But these three camps are thankful for financial and prayer support from churches and individuals since 2020.

“While the last two summers have been a bit different, we can say without fail, our God has remained faithful,” says Jon Casbohm, executive director of Skyview Ranch.

Scott Bruns, executive director of Scioto Hills Christian Camp and Retreat Center, says, “As we have weathered the storm by His grace, we have also discovered that folks are anxious to come to camp.”

All three camps are thrilled to offer full schedules of events this year.

Dave Sellers, executive director of Camp Patmos, says, “We are looking forward to how God will do more than we can imagine or expect this year at Camp Patmos.”

During the meeting the women also heard from Deb Searles, whose husband, Calvin, is pastor of Abbe Road Baptist Church, Elyria, Ohio. Deb serves in a Bible club at a public school, a ministry that God unexpectedly placed in her life, she says. Sharing her passion for reaching children with the gospel, she gave the women ideas for children’s ministry in their own communities.

A choir of children’s ministry workers from her church and Chardon (Ohio) Baptist Church joined her in singing as she led them while playing the guitar.

Ohio Women for Missions meets twice a year—in the spring and fall. The group is now looking forward to its November retreat in Sugarcreek, Ohio.