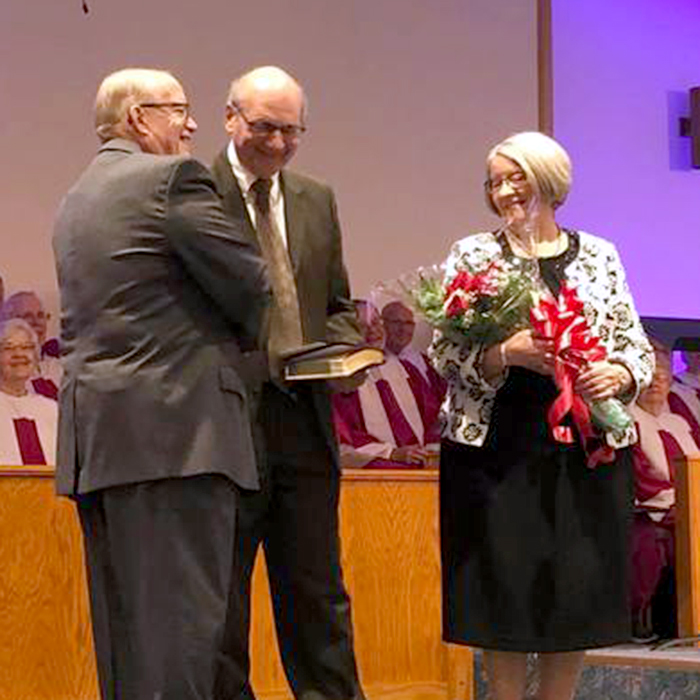 SEBRING, Fla.—Maranatha Baptist Church is rejoicing in God’s goodness for providing an interim pastor after the sudden Homegoing of Pastor Terry Price in October.

The church has called Ernie Schmidt as interim pastor. He and his wife, Gen, began their ministry at the church on Sunday, March 1. To commemorate the occasion, the church invited Doug McLachlan, chancellor of Central Baptist Theological Seminary, to speak during the morning service. He “brought a masterful message from 2 Timothy 2:3–7 that paid tribute to Ernie’s lifelong testimony and set the tone for his upcoming ministry at MBC,” the church says. The congregation also recognized the church’s deacons, as well as retired pastors living at Maranatha Village, a Baptist retirement community in Sebring, who spoke during church services over the last four months.

Ernie Schmidt (DMin, Central Baptist Theological Seminary) taught theology at Faith Baptist Bible College and Theological Seminary beginning in 2002 and later served as associate dean and then dean before retiring in 2013. While he was a faculty member he also pastored churches in Minnesota, Montana, and Alaska and wrote the chapter “Shepherding with Pastoral Care” for The Pastor: A Guide for God’s Faithful Servant, published by Regular Baptist Press.