A team of 24 from Fellowship Baptist Church ministered in Jamaica at Independence Hall Baptist Church in Axe and Adze alongside Pastors Hervill Willey and Kingsley Smith. 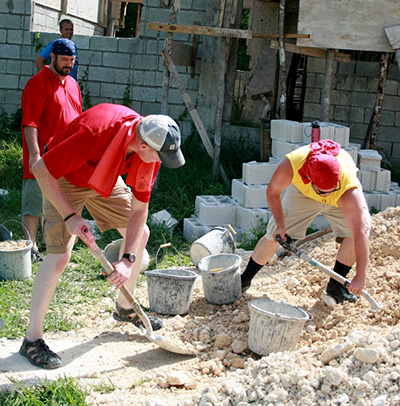 JASPER, Ind.—A team of 24 from Fellowship Baptist Church ministered in Jamaica at Independence Hall Baptist Church in Axe and Adze alongside Pastors Hervill Willey and Kingsley Smith. In 2013 the two churches entered into a five-year strategic partnership with the goal of helping both churches grow. This summer’s trip focused on reaching teens through a youth rally and children through Vacation Bible School. The Fellowship Baptist team also had the opportunity to visit and work at a Jamaican Christian school for the deaf located near Montego Bay.

Another unique ministry took place on the beach off the Hip Strip in “MoBay” as the team ministered through the wordless Everything skit, accompanied by music from Lifehouse. The sea wall was lined with spectators, and even those enjoying the water watched as the team dramatized a girl being created by Jesus, then separated from Him by temptation and sin, and finally rescued dramatically by Him.

Dave King, pastor of Fellowship Baptist Church, says the trip was a great success: “We saw individuals saved, we strengthened our partnership with Independence Hall Baptist Church, and the team members grew in their walk with Christ.”

The Jamaica team included the Dumond, King, Hughes, Patterson, Dale, and Burgan families along with two teens, Dylan Schneider and Deondra McQueary. But these 24 were not the only members of Fellowship Baptist taking part in a missions trip this summer. George Astrike, who lives half the year in Indiana and half in Florida, served with his son and about 20 others from his Florida church on a music team to Wales. Marisa Durcholz traveled to Asia with a friend and served for 10 days at an orphanage in India. Pastor King says Marisa was greatly moved by her time in India and continues to find ways to advocate for adoption and foster care. And Andrew and Alexis King spent 10 days in Haiti, working alongside their uncle, Bob King, at Mission of Hope. During their time in Haiti they helped feed children who came for VBS every day, ministered at an orphanage, and painted houses in local villages. Pastor King reports that Andrew came home believing that God may be calling him into missions.