Hospital of Hope to Open in Togo

A new hospital is set to open in Togo, West Africa, and Saylorville Church has played a large role in that process. 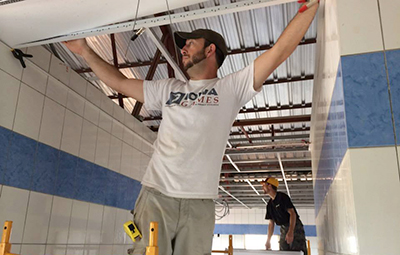 DES MOINES, Iowa—A new hospital is set to open in Togo, West Africa, and Saylorville Church has played a large role in that process.

Hospital of Hope is a project of the Association of Baptists for World Evangelism, which began ministering in Togo in the 1970s. ABWE says, “After several years of ministry in the southern regions of Togo a team of doctors was burdened to reach into the northern region where the needs are great both physically and spiritually. The team in southern Togo voted unanimously to begin the Northern Outreach Project, which includes the ministry of the Hospital of Hope.”

“The goal is simple,” says ABWE in its promo video: “sharing the good news of Christ, the Great Physician, through practical ministry and quality health care.”

In 2009, Don Trott, special assistant to the president for advancement at ABWE, approached Pat Nemmers, lead pastor of Saylorville Church, about getting involved in the building of this hospital in sub-Saharan Togo. Since then, the church has raised funds, made four group trips and several individual trips to Togo, commissioned a missionary, and reassigned another—all for the construction of Hospital of Hope and to reach out to the people of northern Togo. Construction of the hospital is nearly complete and should open on Jan. 8, 2015.