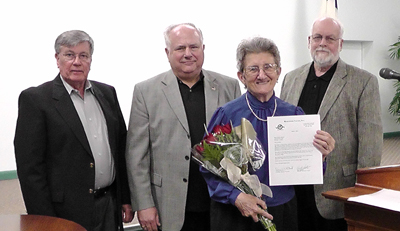 Evelyne Metzler with (from left) Carl Barton, master of ceremonies and anniversary coordinator; Dennis Whitehead, president of the board and producer of a film on the history of Maranatha Village; and Wes Halstead, community manager.

SEBRING, Fla.—“We thank the Lord for Maranatha Village,” said Ellen Reed as she wrapped up her talk on “Seeing Maranatha for the First Time” at the Maranatha Village 40th anniversary celebration. “I thank the Lord for the faith Mrs. Metzler had to move out here. No doubt, if she had not moved here, Evelyne and I would not be here today. We thank the Lord every night for this village. We consider it a real privilege to spend the last years of our lives in a place like this. As I ride my bike around the village, there’s a verse that comes to me quite often: ‘The Lord has done great things for us, and we are glad’” (Psalm 126:3).

Miss Reed recounted her first view of what is now Maranatha Village. She had driven retired missionary Etiennette Metzler out to see the place after “two men from the GARBC” had told her about a new Christian retirement community. “She didn’t remember the names of these gentlemen,” says Ellen, “but they told her they were GARBC. For her, that’s all that mattered.”

Ellen was not impressed. Having her brand new Oldsmobile Toronado get stuck in the sand on their first visit didn’t help. The “village” consisted of a construction trailer/office and one unfinished duplex apartment. “We laughed the whole way home,” says Ellen. “First, she thought it was funny I got stuck in the sand. Secondly, we said, ‘Who in the world would ever move into a place like that?’”

Three months later, Mrs. Metzler was telling Ellen that the Lord was leading her to give up her beautiful apartment and lake view for the sandy, scrubby, unfinished village. “Look how far you’re going to be from your church, from your doctor, from shopping,” Ellen tried pointing out. Mrs. Metzler was adamant: “The Lord’s going to take care of that. I’m not going to worry about it. I know that’s where I’m to be.”

Mrs. Metzler lived in the village 16 years—14 in her own apartment and two in the assisted-living home, Sunshine Lodge. She was promoted to Glory in 1990. Now Ellen and Mrs. Metzler’s youngest daughter, Evelyne, are housemates in the village. And Ellen, having been associated with the village for 40 years, was well chosen to speak about those early days.

Evelyne Metzler, a retired Baptist Mid-Missions missionary, was honored at the dinner “in recognition of the part your mother, Mrs. Etiennette Metzler, played in the beginning days of Maranatha Village. She displayed a wonderful pioneering spirit and a faith in something as yet ‘unseen.’ Etiennette is representative of those who believed in what would one day become a pleasant and comfortable place for living out retirement.”

George and Grace Hadley came to Maranatha to help others “live out retirement.” But God had other plans for them. “Life dealt you an unexpected blow,” read MC Carl Barton, “when George met with an accident that ushered him into Heaven on May 22, 1986. The lovely fountain that the Village enjoys is a memorial of his life of service to the Lord. Thank you, Grace, for representing those who have lived many years at Maranatha Village, loving and serving others.”

That memorial fountain was engineered and assembled by George Conway, brother of the village’s founder, Floyd Conway. George passed into Glory just a few days before the celebration dinner. His widow, Janell, received the village’s appreciation for “the early years of dreaming, working, and sacrificing.” The appreciation letter was addressed primarily to George: “Your brother had a dream to build a retirement village. He had to have help, and you were one of those who stood with him and supported that dream. Your presence is a reminder of God’s goodness in giving all of us at Maranatha Village a place to live. You are a living connection to the earliest beginning of Maranatha Village. Please accept our most sincere ‘thank you’ for a job well done.”

The evening was rounded out by special music, a catered meal, and a film presentation. The music was presented by Joe Chapman, John Dantuma, Jim Macy, and Dick Rounds, who sang “We’ve Come This Far by Faith,” rewording some of the lyrics to fit Maranatha Village. They were directed by Jan Burgess and accompanied on the piano by Judy Tinkham. The quartet also sang “Find Us Faithful.”

Village Manager Wes Halstead greeted everyone and opened with prayer. Dennis Whitehead, president of the village board, put together and showed “Maranatha History,” a film depicting the early days and highlighting what God has done at the village during its 40 years. He also closed the evening with prayer.

During the evening, Carl Barton, who organized the event, recognized volunteers and special guests. Volunteers included Dot Selstad, who prepared the programs and designed a commemorative place mat featuring photos from the 1970s forward. Richard Chapin photographed and videotaped the dinner. Cathy Mooney headed a committee who decorated the tables, which were set up by men under the leadership of Don Laven. In closing his recognition of the volunteers, Carl said, “I’d like to thank you for all who are going to stay and clean up.” There were many, and the cleanup went quickly. They were living up to the village motto: “Serving others ’til Jesus comes.”

Forty years have passed. Generations have come and gone. And with the generations, things have changed. But Maranatha “is still a great place. I wouldn’t want to be anywhere else,” says 25-year resident Jeanne McCulley.

The GARBC congratulates Maranatha Village for 40 years of faithfully and responsibly “serving others ’till Jesus comes.”

What’s it cost to live there?

Jonita Barram is assistant editor of the Baptist Bulletin.