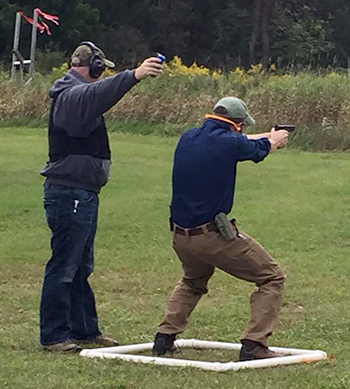 First Baptist Church hosted the event Sept. 12 for the mission agency, which makes its home in Rockford, Mich. Fifteen men and women, including three board members, registered. They all “had a great time shooting pistols, shotguns, and rifles,” Jenkin says.

Participants brought their own weapons and ammunition. While some kept track of their scores, competing for a chance to earn awards at the event’s concluding dinner, others participated only for fun and the possibility of receiving door prizes.

Instead of taking part in the shooting courses, eight people completed the state’s daylong required class to obtain a Concealed Pistol License. The class fee included dinner and a donation to CBM.

Jim Barrett, pastor of First Baptist Church since 1997, organized the event with members of his church. He was the match director for the West Michigan Practical Shooters for several years and is a class “B” shooter with the International Practical Shooting Confederation. Along with his role as pastor, he serves with two counties as a special deputy, police chaplain, and rescue and recovery diver. He also founded Wilderness Adventure and Action Ministries LLC.