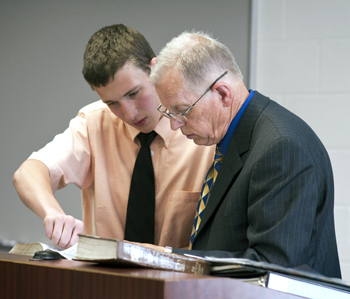 ANKENY, Iowa—Dr. John Hartog II has announced his retirement from full-time teaching at Faith Baptist Bible College. His retirement takes place on a double milestone in his life—he concludes 50 years of ministry and he celebrates 50 years of marriage.

Dr. Hartog began his service for Christ in Texas in 1964 with a literature ministry followed by a pastorate. He also married Martha Nuñez in 1964. He then served for 34 of his 50 years of ministry at Faith Baptist Bible College and Theological Seminary.

Dr. Hartog has taught the Bible survey classes and a variety of other courses at Faith and has served as the librarian. For several years he was also the vice president for business and campus operations. Since he has taught the freshmen Bible survey courses, he may have taught more students at Faith in the last decades than any other professor. While teaching at Faith, Dr. Hartog also planted Maranatha Baptist Church in Grimes, Iowa, and pastored the church for 10 years.

Dr. Hartog has also had an effective writing ministry. He has written several adult Sunday School courses for Regular Baptist Press as well as Enduring to the End, a study on the Jehovah’s Witnesses. Several years ago he wrote Pastor and Deacons, a study of the offices of pastor and deacon. Just a year ago he completed an account of his life and family, which he titled It’s a Crazy, Wonderful Life!: 101 Brief Accounts of the Crazy, Unusual, Happy, Strange, Delightful, Sometimes Dangerous Things That Happened on the Way to My Grave.

While Dr. Hartog is stepping out of the college classroom, he will continue as librarian.

The Faith faculty and administration commend Dr. John Hartog II for his faithful ministry of teaching the Bible to thousands of students and are thankful for the significant impact he has made for the cause of Christ around the world.