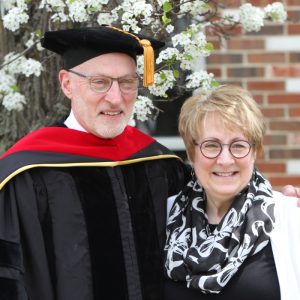 David Strope’s family joins him as he receives an honorary DDiv from Faith Baptist Bible College and Theological Seminary.

David has been interim national representative of the GARBC since December 2021. Prior to that role, he was chairman of the GARBC’s Council of Eighteen since 2016 and was a pastor in Iowa and New York for 45 years.

During his pastorates he also served on the councils of the Northeast Fellowship and the Iowa Association of Regular Baptist Churches. He is currently an elected council member of Baptist Mid-Missions.

For many years David has been “an ardent supporter” of Faith Baptist Bible College and Theological Seminary and has “contributed greatly to the mission and vision of the school,” the school says.

At Faith, David has served as an adjunct faculty professor, a chapel speaker, and a mentor to faculty members, staff, and students. He has also been a friend and resource of counsel to Dr. Jim Tillotson, president of Faith.

“In recognition of his 45 years of pastoral ministry, his career of excellence, and his friendship with Faith Baptist Bible College and Theological Seminary, our recognition today is meant to be a further confirmation that David is God’s man for this new ministry as interim national representative of the GARBC,” Dr. Tillotson said just before handing David the diploma.

In his remarks during the ceremony, David thanked his wife and children, his extended family, his ministry colleagues, and the congregations he has served for their encouragement and support in his service for Christ.

“If I were to borrow Paul’s words,” David says, “‘God forbid that I should glory, except in the cross of Christ,’ that is indeed my glory and my honor today.”