Leaders and law enforcement officers gathered with Broadview Baptist Church to celebrate the efforts of the North Lauderdale Police Department. 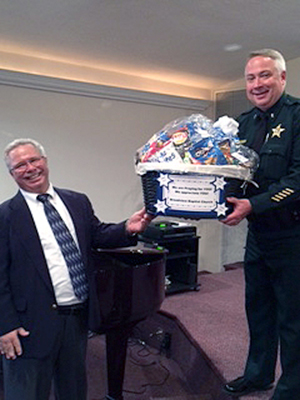 Pastor Jeff Snyder led Broadview Baptist to demonstrate appreciation for the North Lauderdale police and pray specifically for them, especially in light of the recent negative publicity and loss of life among law enforcement officers around the nation. North Lauderdale contracts with the Broward Sheriff’s Office for law enforcement, as do most of the communities in Broward County. Each day, every street in North Lauderdale, a community of 44,000 people, is patrolled by these men and women.

Assistant Chief Deputy McCoy and four of North Lauderdale’s officers were introduced to the congregation. City councilman Jerry Graziose and representatives of the nearby Broadview Homeowner’s Association were in attendance. Both Officer McCoy and Councilman Graziose spoke shortly during the presentation of the officers. Officer McCoy shared that the Broward County Sheriff’s Office staffs over 230 people to handle law enforcement among 1.6 million Broward County residents.

The congregation applauded the officers in response to their presence and their efforts, and presented them with a large basket of snacks as a token of appreciation. Pastor Snyder then preached from 2 Samuel 21:15—22:51, along with God’s exhortation from 1 Timothy 2:1 and 2 to pray for those in authority.