Conference Addresses “Training the Next Generation of Pastors” 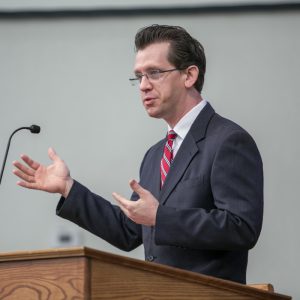 Pastor Michael Riley speaks at the Conference on the Church for God’s Glory.

ROCKFORD, Ill.—“Training the Next Generation of Pastors” was the theme for the Conference on the Church for God’s Glory May 23.

Michael Riley, pastor of Calvary Baptist Church, Wakefield, Michigan, opened the conference by preaching on “Knowing from Whom You Learned It,” based on 2 Timothy 3:10–15.

Additional speakers were Kevin Bauder, a Regular Baptist Press author, who spoke on “The Future of Ministerial Training”; David Saxon, a professor at Maranatha Baptist University, who addressed “A Pastoral Theology from the Ordination Sermons of Andrew Fuller”; David Huffstutler, pastor of the host church, First Baptist in Rockford, who spoke on “A Biblical and Practical Model to Find and Train Your Church’s Next Lead Pastor”; and Bob Jones III, chancellor of Bob Jones University, who presented “Lessons Learned from Training Pastors.”

David Strope, interim national representative of the GARBC, attended. Several pastors of Regular Baptist churches attended as well and were pleased to form friendships with other Baptist pastors.

“This conference was particularly helpful in view of the increasing need to identify and train men and to identify them as called by God into pastoral ministry,” David says. “This theme was addressed expositionally, historically, and personally by each of the conference speakers.”

The day earlier, David spoke at New Life Baptist Church, Lake in the Hills, Illinois. He presented the ministries of the GARBC and preached in two services.

Mark Wood has been pastor of New Life Baptist Church since 1996, first planting the church as a missionary serving with ABWE, then leading the church to self-supporting status and affiliation with the GARBC.