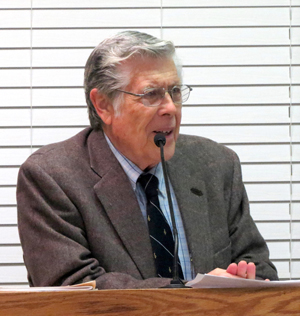 Dr. David Nicholas, president of Shasta, opened the conference with a message titled “Creation and End-time Prophecy: Why Should Christians Care?” Scientists from the Institute for Creation Research, including Randy Guliuzza, MD, powerfully addressed the topic of creation. In addition to his experience as an Air Force flight surgeon and chief of aerospace medicine, Dr. Guliuzza is also a professional engineer with a degree from South Dakota School of Mines and Technology and holds a masters in public health from Harvard University. In his presentation titled “Engineered Adaptability Exposes the Lie of Natural Selection,” he demonstrated not just the improbability but the impossibility of man’s evolutionary origins from both the anatomical structure of the human hand and eye.

Physicist and meteorologist Dr. Leo (Jake) Hebert III, who holds advanced degrees from Texas A&M and the University of Texas (PhD) addressed the big bang theory, presenting Biblical and scientific reasons why Christians should reject it.

A third scientist, Professor Mark Armitage, also spoke. Armitage was recently fired from his position in the biology department of California State University–Northridge because of an article published in an international scientific journal verifying his finding of soft tissue in the suborbital horn of a Triceratops Horridus dinosaur. Armitage presented astounding evidence via electron microscope magnification of flexible, soft tissue in the horn of this dinosaur, which is supposedly millions of years old.  The problem, he pointed out, is that evolutionary scientists know soft tissue can’t survive millions of years. He called his presentation “An Evolutionist’s Nightmare.” 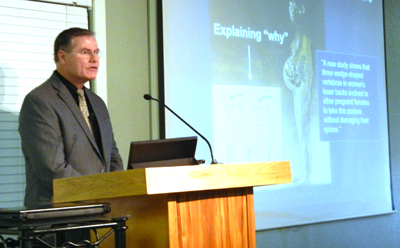 On Bible prophecy the speakers included Dr. Randall Price, founder and president of World of the Bible Ministries and executive director of the Center for Judaic Studies at Liberty University, and Dr. John S. Feinberg, professor of Biblical and systematic theology at Trinity Evangelical Divinity School. Feinberg was also the keynote speaker for the CARBC pre-conference sessions at Grace Baptist Church in Redding, where he addressed the topic of “The Christian and Suffering.”

Dr. Al Franklin, pastor of Grace Baptist Church, anchored the final session with a message on “Astounding Fossil Evidence for Biblical Creation.” Dr. Franklin is one of today’s foremost experts on the fossil evidence and how it refutes the evolutionary hypothesis.

Next post Church Meets for Prayer at City Hall