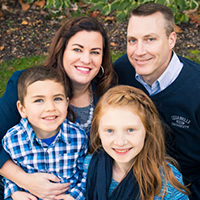 TOLEDO, Ohio—With permission from the author, Emmanuel Baptist Church hosted a missions emphasis based on the book Radical: Taking Back Your Faith from the American Dream by David Platt. The congregation was encouraged to read and adopt the lessons taught in Radical, with each service emphasizing one of the nine chapters.

Paul Davis, president of the Association of Baptists for World Evangelism, was the keynote speaker in the first service. Dr. Thomas White, president of Cedarville University, spoke on “Why Going Is Urgent, Not Optional” (chapter 7 in Radical). Other speakers were missionaries to the Chinese, new missionaries appointed to theological education, a veteran missionary to The Gambia, and new missionaries to France. The videotaped testimony of Jennifer DeKryger fit with the chapter, “Living When Dying Is Gain.” Jennifer’s husband, Todd, was chief of staff at Hospital of Hope in Togo, West Africa, when the Lord called him Home in 2016.

Dr. John Briggs, also a medical missionary in Togo, spoke at a breakfast, and the women of Emmanuel enjoyed a ladies’ tea. Other events included hearing from international students who have come to faith while studying in Toledo. Missions committee member Jenifer Christiaanse says, “What a thrill to hear a phone conversation from a Chinese student who was baptized at Emmanuel and who now is a witness in her home country!”

The church got a taste of that young woman’s and other Chinese believers’ experience. Those who had received invitations to a clandestine service poured into the bus barn behind Emmanuel Christian School on Sunday evening. Describing the scene, Jenifer says that seniors, teens, and toddlers sat on blankets spread on the cement floor. But by the end of the service, it was standing room only. Pastor Duke Crawford read Scripture by the dim light of a dangling light bulb, while the group celebrated Communion. Among those in the barn were guests from China, who described what God has been doing there. In the fall of 2017, the government closed their house church, but the believers were rejoicing because more than a dozen smaller house churches have been started since then.