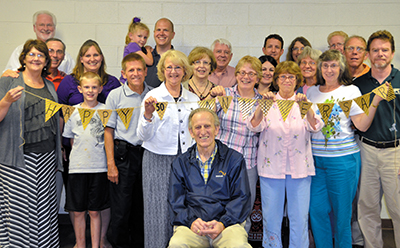 CBFI is a ministry of Baptist Mid-Missions that ministers to students at secular colleges. CBFI flew in Hal Miller, its “founding father,” from his home in Colorado to tell about the ministry’s early years.

Back in 1965, Miller was pastor of Bethel Baptist Church, Iowa Falls, Iowa, when he became burdened to reach college students near his church. At the same time, Baptist Mid-Missions was also considering starting a university ministry. In 1966, BMM accepted Miller and his wife, Patty, as missionaries, and they began ministering at several community colleges and the University of Northern Iowa. 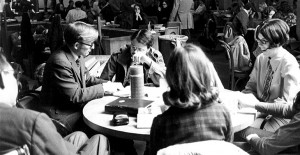 Hal Miller (left) leads a CBFI meeting at the University of Northern Iowa in 1972.

Over the years, hundreds of students have been saved, with many going on to attend Bible college and enter Christian service. Today CBFI groups meet across America, working with Baptist churches to reach American and international students alike with the gospel and with an emphasis on discipleship. In recent years, the ministry of Hal Miller and CBFI have influenced international churches in countries like Papua New Guinea, the Philippines, India, Peru, and Spain to start their own campus ministries.