A college campus is the perfect mission field, whether it’s for reaching international and American students or opposing the enemies of the gospel.

A college campus is the perfect mission field, whether it’s for reaching international and American students or opposing the enemies of the gospel. A missionary with Campus Bible Fellowship tells some of his experiences breaching the walls of secular academia, lighting the darkness, and sharing the gospel with students.

A year ago, the national director of Campus Bible Fellowship in the Philippines e-mailed my dad, Hal Miller, and me, asking if we would co-preach at the fellowship’s national Renown Conference this past fall. Of course we both enthusiastically replied yes.

For the past 32 years, my wife and I have discipled American and international students at the University of Iowa and the University of Colorado, both of which epitomize strategic, cosmopolitan mission fields. Although my dad had preached in the Philippines several times, this would be my first experience ministering outside the U.S. On our way to the Philippines, we stopped in Los Angeles and, along with fellow Baptist Mid-Missions missionaries Dean and Lois Senning, shared the gospel with 15 Iranians, one of whom had been a close friend of the Shaw of Iran.

Potential in the Philippines

The next morning we flew to the Philippines, and the following night my dad spoke to 60 engineering students at a Campus Bible Fellowship meeting. The next day we both preached the gospel to audiences of 900 and 400 kids at two public high schools. Later that afternoon, my 83-year-old dad and I played full-court basketball. At halftime I was asked to share the gospel. 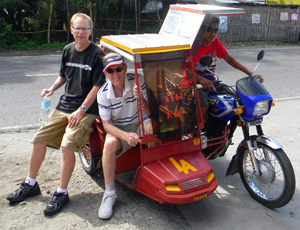 The next day we rode a jeepney to a picturesque oceanfront, where my dad and I preached to 90 engineering students at a retreat. After I spoke, and in stark contrast to students in the States, many of the students asked for my trifolds, which include “An Intelligent Discussion of Intelligent Design” and “Are All Religions the Same?” The following day my dad and I preached at four churches. At the first church the people were even more impoverished than most Filipinos, yet they were very responsive to the Word.

The next day we rode a boat to a different island. (Factoid: The Philippines has more than 7,000 islands.) Finally we arrived at the Renown Conference, held at the Goducate Training Center in Iloilo City, where we spoke to 160 students from 15 colleges, as well as staff and pastors who are particularly burdened to reach college students. Before we preached, students asked us if they could pray with us. After praying with them, I preached on two of my favorite topics, “How Do Christians Know the Bible Is God’s Word?” and “How Would You Make a Beeline to Jesus?” I also spoke at a workshop on “Biblical Principles for Dating.”

After we preached, students stood in line with their Bibles in hand, waiting for us to write our names in each one. My dad and I were highly impressed with the students’ spiritual hunger and respect. In the mornings the students were strewn throughout the campground, passionately reading their Bibles and praying, which led to my dad saying, “I wonder if the Philippines could be the next epicenter from which the gospel will go forth throughout the world!”

The following Sunday I preached in a church plant and, that night, preached in the mother church, which was full of former Campus Bible Fellowship students who had recently graduated from college. The next day we toured a strategic Association of Baptists for World Evangelism hospital, noting its 1940s X-ray machine, a typewriter, and lack of air-conditioning.

The next day, in the Manila airport, my dad initiated conversation with Jerry from India, who said he was born a Christian. Jerry later asked to sit beside us on the plane, and my dad shared a variety of Scripture passages.

Without a doubt, those two weeks were some of the most delightful weeks of our lives. (Having returned two days before the shooting of a TSA officer at the Los Angeles International Airport and two weeks before Typhoon Haiyan certainly helped!) 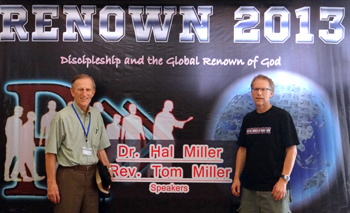 As I was returning to post-Christian America, which has “grown fat . . . and turn[ed] to other gods” (Deuteronomy 31:20), I could feel the apologetics pendulum reversing from “confirmation” to “defense” (Philippians 1). Recently two unsaved students stopped by my literature table at the University of Colorado and kindly bantered. After admitting that they didn’t know how to answer some of my questions, they challenged me to interact with their professor in their honors God and Politics class. So I visited. Now I’m planning to audit the class, as well as Intro to the Bible, which is taught by a different professor.

Auditing college classes has given me many opportunities to interact with students and professors. I audited a class in which a University of Colorado professor daily desacralized the ultimacy of the Word of God. For example, one day “Prof Z” unblushingly referred to Joseph (after he had said no to Potiphar’s wife) as “the queer hero of the Hebrew Bible.”

Refusing to view myself as a “grasshopper” (Numbers 13:33) in front of 150 students, I objected, “Joseph epitomized purity, and yet you call him a homosexual?”

Shortly after that encounter, I attended a Jewish colloquium and afterwards fortuitously ate with several Jewish studies professors and students. I had no idea that Prof Z had tattled on me to her colleagues, and in time the lady next to me, Professor Goodman, squinted and then asked if I was “that auditor.” I admitted, “Yes. Prof Z referred to God as ‘violent.’ However, God is not violent, though He is ‘holy, holy, holy!’”

A minute later the head of the Jewish Studies Department, David Shneer (who, when introducing the speaker earlier, mockingly called Jesus “a crazy Jew”), asked with furrowed brow, “Did I overhear you say that you’re that auditor?” Again, without blinking, I said, “Yes. Joseph epitomized purity; he wasn’t a queer.”

I faintly understand Paul’s metaphor, “I have fought with beasts” (1 Corinthians 15:32).

But not everyone in “The Peoples’ Republic of Boulder” is a “beast.” For example, in December, students from our English class at Family Housing came to our home and heard the Christmas story. And one Sunday, students from China, Malaysia, Hungary, and the U.S. attended our church.

The college campus, whether in the Philippines or in the U.S., is the consummate mission field! Does anybody want to “help us” (Acts 16:9)?

Mike and David discuss Christian living and church ministry in an age of Coronavirus ...more

On the association level, major decisions are being made regarding our annual conference. The Council of 18 conference committee has developed an alternative option, which ...more