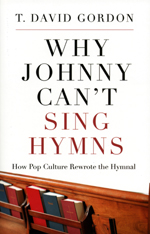 The book’s title and cover more or less reveal the thesis, along with the initial statement on the back cover: “Changes in music have affected the way we think, the way we worship—even the way we are able to worship. We are steeped in a culture of pop music that makes other genres seem strangely foreign and unhelpful. Worship has become a conflict area, rather than a source of unity.”

Gordon begins by sharing how his singing hymns comforted his daughter who was dying of leukemia. Then the entire book follows with food for thought, regardless of where a person stands on the topic of music and worship. Consider a sampling of statements made throughout the book: “Most Baptists know something of the rationale for why they reject paedobaptism. But we rarely find a similar awareness of the rationale for including or excluding contemporary worship music.” “Biblically, then, neither music nor song is merely a matter of entertainment or amusement. Both are very serious business, both culturally and religiously. Song is the divinely instituted, divinely commanded, and divinely regulated means of responding to God’s great works of creation, preservation, and deliverance.” “Professor Leland Ryken of Wheaton College once observed: ‘Earlier in this century someone claimed that we work at our play and play at our work. Today the confusion has deepened: we worship our work, work at our play, and play at our worship.’ ”

The book has questions at the end of each chapter, and an interesting chart showing the differences between “pop culture” and “classical culture” constitutes an appendix at the end.

Next post KJV: The Making of the King James Bible