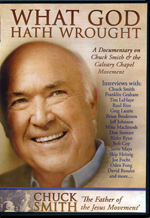 Like it or not, Regular Baptists must recognize that Chuck Smith has had a profound effect on evangelical and fundamental Christianity since the 1960s. This includes an effect on GARBC churches—even if it is but singing a couple of praise choruses in worship services.

Through interviews with Smith and other leaders, the author presents an informative summary of the ministry of this unpretentious pastor. Especially interesting are photos and accounts of Smith’s early ministry in miniscule churches, of his family, and of the beginning of the journey that resulted in him being considered the father of the Jesus Movement. Smith’s wife was the one who, weepingly, first became burdened for the souls of the many hippies congregating along the beaches of Southern California. But God got ahold of Smith’s heart too. He started simply giving them the Word verse by verse, and they came and came and came until thousands were worshiping under a huge tent!

We may not agree theologically with everything Chuck Smith believes and does, but we cannot get away from his intense love for Jesus and people, his simple reliance on God, his demonstrative joy, and his unmistakable humility.