What Every Man Wishes His Father Had Told Him 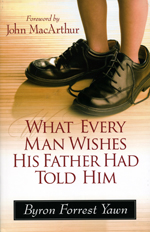 In the foreword, John MacArthur calls attention to the role that fathers in Bible times played in the lives of their sons if they were true to God’s Word. The only record of Jesus’ teen years, for example, is Luke 2:52, which says that under Joseph He “increased in wisdom and stature, and in favor with God and men.” MacArthur observes, “In stark contrast to the biblical pattern, young men in our culture today begin to manifest adolescent characteristics . . . earlier than ever—and they remain immature longer than ever. Some, it seems, never do become true men. In fact, many become fathers without ever really becoming adults. . . . Permanent adolescence is relentlessly romanticized and shamelessly encouraged. . . . Manhood itself is often strongly discouraged.” This book is an attempt to help men see what the Bible says about manhood, and what a mature man should be in Jesus Christ, whether in his marriage, his sexuality, his work, his integrity, or other areas.