The Legacy of the King James Bible 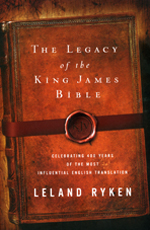 Here’s another tribute to the 400th anniversary of the King James Bible, “the most influential English translation” (as the front cover states). Leland Ryken, professor of English at Wheaton College, has examined not only the KJV’s influence but its roots, making, literary perfection, acclaim, and subsequent history. He writes, “It might be expected that the literary influence of the King James Bible would wane as we move into the modern era. . . . But this is not what we find. Even in the modern era, the Bible is the most referenced book in English and American literature.”

The author’s noteworthy emphases include the literalness of the KJV Bible and that it was a “common Bible.” Ryken maintains that society has lost at least four advantages by not accepting the literalness and “commonness” of the Bible. He also explains at least four advantages the KJV offers as people look to the future. He concludes, “We should not relegate the King James Bible to the status of a relic in the museum of the past. There are multiple ways in which it can continue to be a living presence in our lives.” The book has general and Scripture indexes and notes.