KJV: The Making of the King James Bible 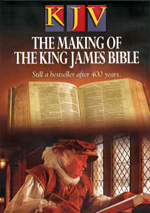 This year hails the 400th anniversary of the King James Version of the Bible. Still a best seller, the KJV is considered the greatest, most beautiful piece of English literature ever produced, and it is amazingly true to the original manuscripts, especially considering who worked on it and what they had to work with. This DVD brings to life the fascinating history of the KJV, including the need for a Protestant version following a previous Catholic influence. It also shows why the earlier Geneva Bible was politically unacceptable. Though about 80 percent of people were illiterate at the time the version came out, the KJV brought about a lasting appreciation of the Scriptures.

Next post Are We Commanded to Pray for the Salvation of the Lost?