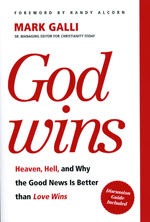 God Wins is a response to a controversial book, Love Wins, by Rob Bell. Bell’s basic thesis is that we Bible-believing Christians have been wrong in our belief “that a select few Christians will spend forever in a peaceful, joyous place called heaven, while the rest of humanity spends forever in torment and punishment in hell with no chance for anything better.”

Bell, who grew up in a fundamental church in Grand Rapids, has moved in a different direction through the years, and so denies that the Bible alone is authoritative and our final guide for faith and practice. Love Wins goes right along with universalism, the idea that everyone will somehow waddle into Heaven, and Bell thinks that people who believe in Christian universalism should be considered orthodox.

Galli, senior managing editor of Christianity Today, counters Bell’s teaching, though Galli says the book isn’t about Rob Bell or his theology, but rather about the greatness of God and His attributes. “God’s attributes aren’t a menu from which we may choose only what we wish—he is all that he is, all the time. The issues underlying both Love Wins and God Wins are, in the end, far bigger than hell. If we can still claim to be Bible believers while radically reinterpreting Christ’s words about hell, stripping them of their straightforward meaning, why should it end there? What about Christ’s virgin birth? His physical resurrection? His deity? What about moral issues? Why not reject everything we can’t figure out? And what would someone have to reject, short of the very existence of God or his Son, in order to no longer be an evangelical Christian?”

God Wins is commendable and thought provoking, though it might have been even stronger apologetics-wise. No doubt, more will be written by others, too, concerning this recent attack on a vital Biblical truth.