Unshackled: Breaking Away from Seductive Spirituality 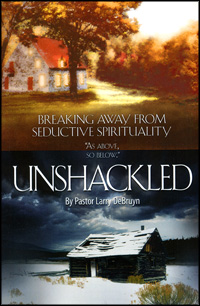 A recent bestseller, The Shack, has been circulating in recent months and has been raising a lot of controversy. Larry DeBruyn, pastor of Franklin Road Baptist Church, Indianapolis, endeavors to evaluate The Shack from a Biblical perspective: “I hope these essays will provoke Bible believing Christians to shun the existential romanticism which is influencing the evangelical movement via such writings like Wm. Paul Young’s bestselling spiritual allegory, The Shack.”

But, more than that, DeBruyn’s purpose is to expose unbiblical philosophies behind such a writing: “As will be demonstrated in this book, Hermetic-Gnostic philosophy is establishing itself in American culture, and to some degree, in the pan-evangelical church. . . . Hermeticism is a monistic belief that the entire reality is one, and that this ‘One’ is God. . . . Absent special revelation from God about God to human beings, religion is a dicey deal—a crapshoot. One person’s religious experience or belief system becomes pitted against another’s, and more often than not, the interplay of multiple spiritualities lead the devoted into the signs and wonders of a religious never-never land. . . . By way of contrast, Christian believers find transcendent meaning for their lives in the Word of God—in the person of the historical Jesus and the Scriptures which bear authentic witness to Him (John 5:39, 46–47; Luke 24:27). In other words, Christians do not look within or below, but they look without and above to find the purpose for their lives. Their faith is not based upon subjective and existential feelings, but upon the objective truths God has spoken through and in His Word.”

Unshackled should be a valuable tool in evaluating The Shack and related trends in theology.

Previous post Hymns We Love No. 3 Arranged for Men