Book Review: The Politically Incorrect Guide to the Founding Fathers 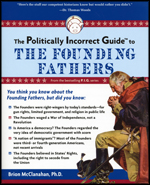 Since Christians want to know and promote the truth, this book has significance. Religious and political liberals have sought and are seeking to destroy the foundations of our beloved nation, which were built on Biblical principles. And one way they do that is to trash the early founders and leaders who, like all of us, were not perfect but certainly were champions of liberty and religious freedom.

As the back cover points out, the Left wants people to believe our founding fathers were “wealthy, racist, sexist, dead-white males whose principles deserve to be as dead as they are. . . . Dr. Brion McClanahan sets the record straight.”

Part I covers numerous ugly myths, realities, and issues of the founding generation. Part II hones in on “the big six,” key men of American independence including George Washington and Thomas Jefferson, followed by a number of chapters on “the forgotten founders.” This part is particularly interesting, as most of us know little or nothing about these individuals. Throughout this fine book are numerous sidebars such as “Why the Framers Created the Electoral College.” Each chapter also has sidebars called “Books They Don’t Want You to Read,” suggested books that provide additional valuable information on various issues from a pro-American, conservative viewpoint. The book also has a bibliography and an index.

One cannot come away from this book without having a better understanding of the founding of our country. Dr. Thomas Woods, author of several New York Times bestsellers, says of this work, ” Brion McClanahan does far more than merely rehabilitate the Founders. In his devastating and relentless presentation, he reminds us, on one issue after another, how utterly opposed they were to what has since become fashionable opinion. Here’s the stuff our competent historians know but would rather you didn’t.”