The Apologetics of Jesus 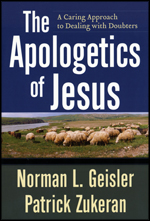 The basic thesis of this book is that Jesus, the ultimate Defender of the faith, is our model for defending our beliefs: “Even though apologetics, derived from the Greek and defined as ‘to defend using reason and logic,’ is considered in modern Christianity as a way to defend Jesus, Geisler and Zukeran argue that because Jesus had to defend his own claims to be the Messiah, he was, by definition, an apologist. Geisler and Zukeran noticed that no one had written a major work on the apologetic works of Jesus. This book is an attempt to correct that omission.” The book demonstrates how Christ used testimony, miracles, the Resurrection, reason, parables, discourse, prophecy, and arguments for God in defending the faith.

Christians need to use the example of Christ in being an effective witness for Him to the unbelieving world. The book’s introduction points out that, in fact, Jesus’ apostles used apologetics in their preaching, following Jesus’ example. Acts 1:3 says that Jesus presented Himself with many infallible proofs. Peter said that we need to “always be ready to give a defense to everyone who asks you a reason for the hope that is in you” (1 Pet. 3:15). The authors rightly point out, as useful as apologetics might be, that “Jesus knew that evidence alone could not convert anyone. . . . Apologetic evidence provides the necessary condition for salvation, while only Spirit-induced saving faith produces the sufficient condition for it.”