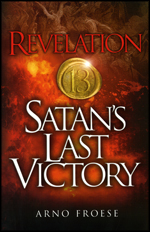 There is no question that Revelation 13 is a pivotal chapter in the Bible’s last book. Lehman Strauss wrote, “In Revelation 13 we have a detailed description of [Satan’s] all-out effort in the earth prior to his being cast into the bottomless pit. It is his last drive to defeat the program of God and establish his own kingdom.” M. R. DeHaan wrote, “The number thirteen has from time immemorial been associated with distress and trouble. . . . We realize that the chapter divisions in the Bible were not inspired and not in the original manuscripts. However, it is a striking coincidence that Revelation 13 should be the chapter which describes the two greatest rebels of all history: the political beast out of the sea and the religious beast out of the land.”

Arno Froese endeavors to bring current world trends into the efforts of “Satan and his cohorts in their desperate attempt to create peace, security, and prosperity for all people on planet Earth.” These efforts will wind up in the one-world government of the Tribulation period. Already we see so many efforts toward globalism.

Froese points out how things have changed even since the years of the Great Depression. His mother commented to him that she and her husband barely noticed, or were affected by, that period of time, since they were farmers and self-sustaining. Now “the farming community has shrunk to about 1.5 to 2 percent of the population in the progressive nations. Because of advanced technology, they too are very dependent on the economy, financial institutions and the global price war. Virtually no one is exempt: all are part of the race for more material possessions. That is the picture of today. For the first time, the whole world is affected by the global economic recession.”