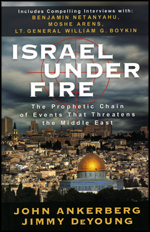 The book’s foreword begins, “Is Israel really under fire? President Mahmoud Ahmadinejad of Iran has vowed to ‘wipe Israel off the map.’ Pope Benedict’s 2009 visit of Israel called for the establishment of a Palestinian state that would divide the land of Israel. Rockets continue to enter the borders of Israel from Hezbollah in the north and Hamas in the south. Israel is literally under fire.”

Israel Under Fire helps bring readers up to date in the escalating Palestinian-Israeli conflict, which has been going on ever since Israel became a nation in 1948. To do this, Ankerberg and DeYoung give us material based on incisive interviews with 20 leading political figures, including Benjamin Netanyahu, Israel’s current prime minister. All of this material dovetails with a thoroughly Biblical review of Bible prophecy, with chapter 13 answering most-asked questions about the book of Revelation. Appendix material is valuable as well. Before the appendixes, “A Final Word” is a message of salvation for the unsaved reader.