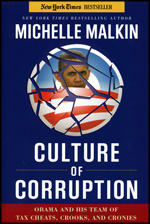 Christians have a duty to pray for our leaders, to keep themselves aware of current conditions in the nation, and to vote. This New York Times best-seller will aid the believer in assessing the current administration in Washington, D.C., so that he or she can perform these responsibilities.

The author, an investigative reporter, is founder of two blogs, a daily-newspaper journalist since 1992, and contributor to Fox News Channel since 2001. She won the Council on Governmental Ethics laws national award for outstanding service for the cause of governmental ethics and leadership, and for investigative columns that exposed campaign finance abuses and corruption by Washington State Democrats, Republicans, and political organizations.

A news release for Culture of Corruption maintains that the current president “has indulged in a breath-taking campaign of nepotism, self-dealing, back-scratching, corporate lobbying, government favors, entrenched incumbency, and hypocrisy. Obama’s government is not exactly the change people were hoping for.” The reader will need to decide.