CLARKS SUMMIT, Pa.---President Jim Jeffery, who has led Baptist Bible College and Seminary with distinction for 13 years, will step down from his role in 2015. 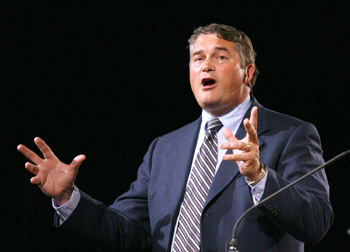 CLARKS SUMMIT, Pa.—President Jim Jeffery, who has led Baptist Bible College and Seminary with distinction for 13 years, will step down from his role in 2015.

“It has been my joy to serve our students at BBC&S along with our team of godly faculty, staff, and administration,” Jeffery says. “I am deeply grateful for the partnership with my wife, Bert, during this entire time. The support and encouragement of our trustees has been a source of wise counsel and help to my leadership. All that has happened has been the result of God’s provision and blessing on BBC&S.”

A national higher education executive search firm has been retained to assist the board of trustees in hiring the next president, says Dr. John Greening, board chairman and GARBC national representative. A search committee will be led by Don Shirk, BBC&S trustee and pastor of Grace Baptist Church, Batavia, N.Y.

“It is with reluctance that the trustees accepted the decision of Jim Jeffery to conclude his presidency,” Dr. Greening says. “During his tenure much has been accomplished. Jim has made many new friends for the college in the educational arena, in local churches, among donors, and in the northeast Pennsylvania region. It is with profound respect that I express on behalf of the board our gratitude for his leadership.”

Several on-campus improvements took place under Jeffery’s leadership, including the completion of the largest building project in the school’s history—the new Recreation Center. A range of improvements also came to campus during his time as president, such as new roofs for residence halls and in many cases complete renovations. The creation and large expansion of online distance education at the undergraduate, graduate, and seminary levels came through his leadership as well, as did the development of a PhD in Biblical studies.

Dr. Jim Lytle, provost since 2007, has been named executive vice president and will lead the current administrative team during the presidential transition.

“When students and visitors drive through our campus, they immediately see the effects of millions of dollars President Jeffery has raised to upgrade and beautify our facilities and grounds,” Dr. Lytle said. “Other contributions are not as visible. For instance, hundreds of students have benefitted from his willingness to ask for contributions for scholarships.”

Jeffery is the longest-serving active president among all colleges and universities in Northeastern Pennsylvania, and is the second-longest serving president in BBC&S history, behind Dr. Milo Thompson, who served 15 years.

“God has clearly led us to transition back to pastoral ministry at this stage of our lives,” he said. “We have appreciated the support of our family, friends, and other wise counselors in the process of decision making. My love for local church ministry as a shepherd of God’s people has only increased through these years.”