TOLEDO—Emmanuel Baptist Church has said farewell to secretary Marcia Stover, who has retired after 40 years. 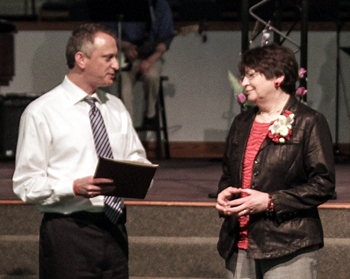 TOLEDO—Emmanuel Baptist Church has said farewell to a faithful mainstay in its church office. Secretary Marcia Stover has retired after serving with six pastors and two interim pastors over 40 years.

Marcia, born and raised in Toledo, interviewed for a position at Emmanuel Baptist Church while working in downtown Toledo. “Recognizing her fine character traits, Pastor Sewell hired her on the spot,” says Jenifer Christianaase.

“Those were the days when the tools of the trade were electric typewriters, hardwired phones, calculators, and when the entire payroll was handwritten. This was before the larger sanctuary at Emmanuel was built and when Emmanuel Christian School met in the church. She said the words ‘Don’t run!’ were always on her lips as the students skedaddled through the church halls.”

With each new pastor, Marcia experienced great blessings and small challenges. She learned that “it is wrong to put the pastor on a pedestal. Pastors deserve respect and loyalty, but they aren’t perfect, and it is wrong to have unrealistic expectations of the pastors. I learned to respect, care, and pray for the pastors.”

In addition to her job as secretary, Marcia was also involved in her church’s ministries. A soprano soloist, she sang in the annual Christmas musicals, and she and her husband taught Sunday School in the junior department.

Jenifer says, “Marcia loved seeing the little ones that she had taught mature into adults and has seen some return to be on staff at the church and school.”

Marcia learned a lot about ministry in her various roles, Jenifer says. “She learned that preferences aren’t doctrine. Traditions have changed, especially in music, but doctrine hasn’t changed. ‘Don’t get embedded in traditions!’ she cautions.”

So what character qualities does Marcia think a good church secretary or office administrator should have? Balance, loyalty, and commitment are important. She says, “You may not agree with everything, but above all, you must be loyal and speak well of the pastor and the church.”

On Sunday, April 13, Pastor Duke Crawford presented to Marcia a bouquet of flowers, along with notes and cards from former staff members, before the congregation gave her a standing ovation. The congregation also paid for her and her husband, Butch, to visit the Holy Land when the church family takes a tour in February 2015.

Marcia says she will miss the camaraderie of the staff and working with new church members. But she looks forward to a different schedule. Jenifer relates that “she won’t miss the big flight of stairs up to the office, nor the plethora of people waiting to pounce when she first arrived each morning.”

“When I hand in my key,” Marcia says, “the final reality will click, and I will realize that though my office ministry is over, I will still minister to my mother, to my husband of 45 years, and to others.”

Emmanuel Baptist Church wishes Marcia happiness and blessings as she ministers to others and enjoys a well-deserved retirement. “She has finished well. Her class and charm, her loyalty, and her excellence will be hard to replace!”

Next post Church Ministries Conference: 'We Love the Church'

Previous post College Group "Loves Others Along the Way"