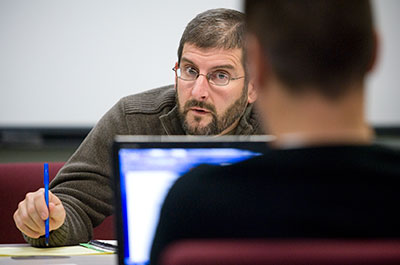 The Wisconsin Association of Regular Baptist Churches has called Jon Jenks as state representative. He has served at Calvary Baptist Church in Wisconsin Rapids since 1995, first as pastor of church education and then, since 2000, as senior pastor.

Bill Mattox, chairman of the WARBC Council of Eight, says Jenks “has sensed God’s leading in his life to pursue a ministry which would allow him to devote time to helping churches train leaders and prepare them for service in their local churches or for a lifetime of vocational ministry. His role as state representative would mesh nicely with that God directed goal in his life.”

Jenks himself says he is “passionate about developing leaders who will repeat the mentoring process with others.” Appropriately, he is author of the chapter “Working with Volunteers” in The Pastor: A Guide for God’s Faithful Servant.

Jenks (MDiv, Baptist Bible Seminary) has served on the WARBC Council of Eight and the GARBC Council of 18; teaches a pastoral training seminar with Biblical Counseling Ministries; leads in planning the annual Regional Connect Conference for pastors in Wisconsin, Iowa, Illinois, and Minnesota; and is helping church plants in their leadership training and ministry development.

In accepting the role as state representative, Jenks has stepped down from the pastorate of Calvary Baptist Church but, Mattox says, will “continue to expand the leadership development process which he has already begun for churches in several other states.”