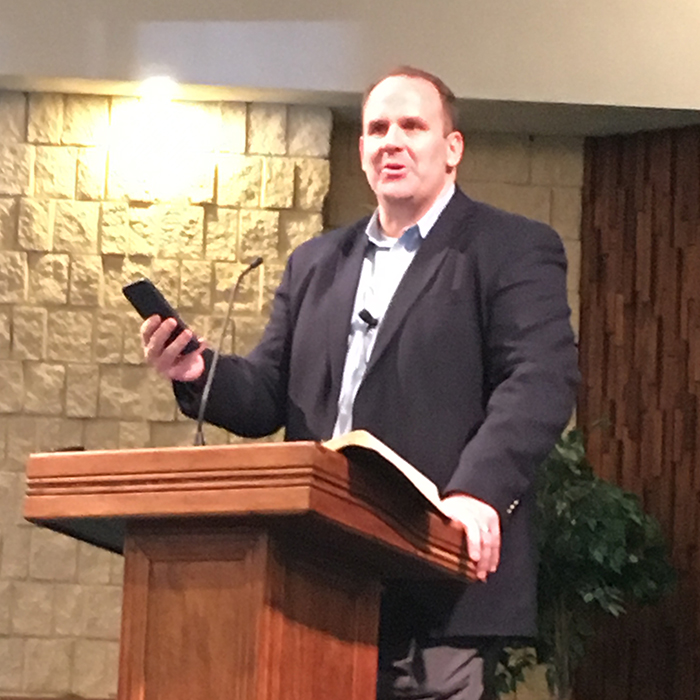 Pastor Jeremy Scott (left) conducts a Q and A with Mike Hess at the Wisconsin Association of Regular Baptist Churches annual conference.

After a good-natured discussion during a business meeting, the proposal passed. WARBC leaders will seek two additional men from the association to fill the roles of state shepherd and state educator, while Jon Jenks (currently state representative of the association) will continue as state leader.

Brookridge Church hosted the conference Oct. 21–22. It began with a dinner, the music ministry of Maranatha Baptist University, and a message from Jenks. Mike Hess, national representative of Regular Baptist Churches, was the keynote speaker for all three sessions. Speaking on “The DNA of a Disciple-Maker,” from John 13 and 15, he pointed out that Regular Baptist churches need Biblically qualified men to serve as pastors who are servant-leaders.

At the end of the third session, Pastor Jeremy Scott of Memorial Baptist Church, Verona, Wisconsin, conducted a Q and A with Hess, inviting attendees to ask him questions. Hess became national representative in June.

The WARBC says that as the association enters another new ministry year, it looks forward to continue “pointing people to Christ for the praise of His glory.”