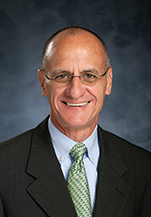 ARLINGTON HEIGHTS, Ill.—Regular Baptist Ministries is pleased to announce the appointment of Dr. John F. Klem to the position of director of Regular Baptist Press. His responsibilities will include providing oversight and direction for the press as well as networking for strategic ministry growth.

“John is a man who believes deeply that the church is God’s platform for teaching the Word of God,” says John Greening, national

representative of the Regular Baptist Churches. “That belief translates into a robust vision to ‘resource’ the church with innovative tools to effectively and fully teach the Bible to all ages.”

John was raised in a Roman Catholic family. He trusted Christ as his Savior in high school after being exposed to the gospel through his classmate Cathy, who would later become his wife. “I was very receptive to the gospel and found myself stepping toward it very sincerely, but I also had a lot of questions, having come out of a Roman Catholic background,” John recounts. “Specifically, I wanted to know what the difference was between what I’d been taught and what I was now hearing from Cathy. The Lord used Hebrews 10:11–14 to answer that question for me. ‘But this Man [Christ], after He had offered one sacrifice for sins forever, sat down at the right hand of God.’ That’s the difference! It’s about the work of this Priest, Christ, and not all those other priests.” Realizing the absolute uniqueness of Jesus Christ and His inestimable sacrifice, John turned to Jesus for salvation.

After graduating high school, John felt called to vocational ministry, so he enrolled in Lancaster Bible College. It was at this time that he and Cathy were married. Upon completing his bachelor of science degree, John went on for seminary training, taking the MDiv and ThM degrees from Baptist Bible Seminary and the ThD degree from Central Baptist Theological Seminary. His academic research has centered largely on genre analysis of Old Testament literature.

During his years in seminary, John ministered pastorally in churches in Wawarsing, New York; West Chester, Pennsylvania; and Moorhead, Minnesota. After he completed his doctoral work in 1999, he and Cathy shifted gears and moved full-time into academic administration. John has served as academic dean and registrar at Central Baptist Theological Seminary of Virginia Beach (now Virginia Beach Theological Seminary), vice-president of academics at Northland International University, and president of Clearwater Christian College. He comes to RBP with a rich background of multifaceted ministry experience, a firm handle on ministerial administration, and a passionate desire to see lives transformed and churches strengthened through the power of God’s Word.

John’s ministry philosophy revolves around a high bibliology, a high Christology, the grace of God, and the centrality of the gospel. His approach is a natural fit with RBP’s mission statement, “to glorify God by providing church educational resources that are true to God’s Word and encourage maturity in Christ.”

“The GARBC and its publishing arm, RBP, have been known for their faithful commitment to God’s Word, to Christ, and to the church,” John says. “Now, at a time when we’re being pressed from a number of different avenues, we have an opportunity to raise that flag even higher, rally around it, and develop a philosophy that emphasizes strong churches and equips them for the future.”

John and Cathy have two adult children, Jason and Alison. Jason is an architect who resides in New York City. Allison and her husband, Derrick, are insurance professionals in Chesapeake, Virginia, and entrepreneurs with a home decor business.