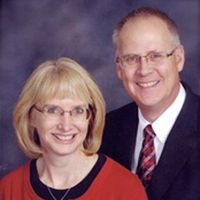 CAMP POINT, Ill.—Faith Baptist Bible College and Theological Seminary honored Tom and Sandy Robbins, pastor and wife at Faith Baptist Church, with its Faithful Servant Award. The school’s Alumni Department gives the award each year to three individuals or couples who have served with distinction in ministry.

Tom graduated from Faith Baptist Bible College and Theological Seminary with a BA in 1982 and an MA in 1984. He began his pastoral ministry in 1985, serving in Iowa until accepting the pastorate of Faith Baptist Church, Camp Point, Illinois, in 1991. Tom has also served on the board of Camp Manitoumi (for many years as board chairman) and is now chairman of the Council of Eight for the Illinois-Missouri Association of Regular Baptist Churches.

Tom says, “It is easy to grow complacent or comfortable in ministry, especially when you have been somewhere for a long time. For me, the challenge is to keep learning, changing, and growing spiritually so that I will stay fresh in my preaching and other ministries.” He adds, “There is nothing better than being a pastor.”