Steak, Fellowship, and the Gospel

Steak, fellowship, and the gospel were a winning combination at Grillville, an event for men at Ankeny Baptist Church. 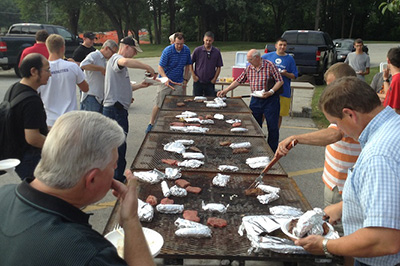 ANKENY, Iowa—Gathering around a 60-square-foot grill outside Ankeny Baptist Church, more than 60 men took part in the Second Annual Grillville Aug. 9. Russ Pals, a deacon at the church, launched a men’s steak feed in 2012 as an opportunity to invite unchurched men to spend time around Christians and hear the gospel. In 2013 the event was renamed Grillville and became a grill-your-own-steak dinner.

“We built a custom grill out of cinder blocks and steel grates and set it up in the parking lot,” Pals says. “The whole idea was to create a unique evening that men would want to try out, offering an easy opening to invite friends, coworkers, and neighbors to a church event.”

About 20 Ankeny Baptist men teamed up to put on Grillville. They came hours early to cut steaks and vegetables, cook cobbler, and build the grill. When attendees—high school age and older—arrived, all they had to do was pick a steak, wrap corn and potatoes in foil, and step up to the village of grills.

As the meal wound down, Tim Capon, state representative of the Iowa Association of Regular Baptist Churches, took the microphone to share a short gospel presentation and encourage visitors to have follow-up conversations with the men who invited them. Many Ankeny Baptist men commented enthusiastically on all the unfamiliar faces they saw during Grillville. The variety of newcomers represented the event’s potential to open conversations with people who might take no other opportunity to visit a church.

A tribal pastor expressed his thanks to God for the gift of food. His family was out of rice and they were  waiting for God ...more

Calvary resumed services on June 21 with two services in adherence to the social distance. Most of the members have returned to church while some ...more