Babs Johnson says she carries out the Great Commission in the same way that, generally, all believers do, but her specific ministry keys in on her love of children, adults, and music. 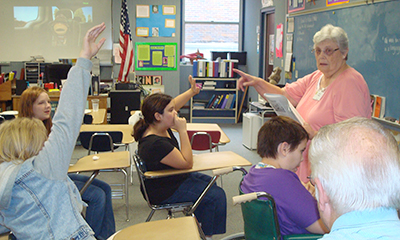 PRINCETON, Ind.—Babs Johnson says she carries out the Great Commission in the same way that, generally, all believers do—“living my life in a way that draws people to my Lord and Savior, Jesus Christ, Who died and rose from the dead so that all who put their trust in His sacrificial act will live forever with His Father.” Her specific ministry, however, keys in on her love of children, adults, and music.

Babs Johnson, a member of First Baptist Church, runs after-school Bible programs for students and also ministers to senior adults. In 2002 Good News Club, a branch of Child Evangelism Fellowship, held its first after-school program in the library of Brumfield Elementary in Princeton, where Babs was teaching fourth grade.

“At that time,” Babs says, “the library was completely open, with no walls, so there were many distractions as teachers and other staff members would pass by this area as the Good News Club teachers were trying to keep the club members’ attention.” Babs was unfamiliar with Good News Club, but Brumfield’s principal asked Babs if the club could meet in her classroom beginning with the 2004–2005 school year. “That was my introduction to Good News Club (and CEF).”

When Babs retired in 2006, she was asked to head up the Good News Club at Brumfield Elementary. “With fear and trepidation, I said yes. I’m so thankful the Lord led me to say yes.”

A couple years later, Good News Club expanded to hold a program called Jesus and You Connection in the middle school. The group meets almost every Tuesday of the school year.

Babs is also involved with a 5-Day Club (also known as Backyard Club), another ministry of CEF that meets in the summer. This program began several decades ago in Princeton, was eventually discontinued, and was reinstituted about 15 years ago. Babs became involved in 2007.

Her greatest interaction with the children in each of these clubs is through music and Scripture. She says, “The verses come alive for me when I put them to music. Students seem to respond to this combination too. I’ve found this true for senior adults as well.”

Three times a week she plays old and new hymns of the faith on her flute in residential centers for assisted-living and skilled-nursing residents. She also shares the Scripture she has put to music. Often the senior adults pray with Babs for the students she meets with weekly in the public schools. Likewise, the students pray for the senior citizens.

“What a great opportunity the Lord has offered me to spread His wonderful good news with all ages! He is a wonderful God!”