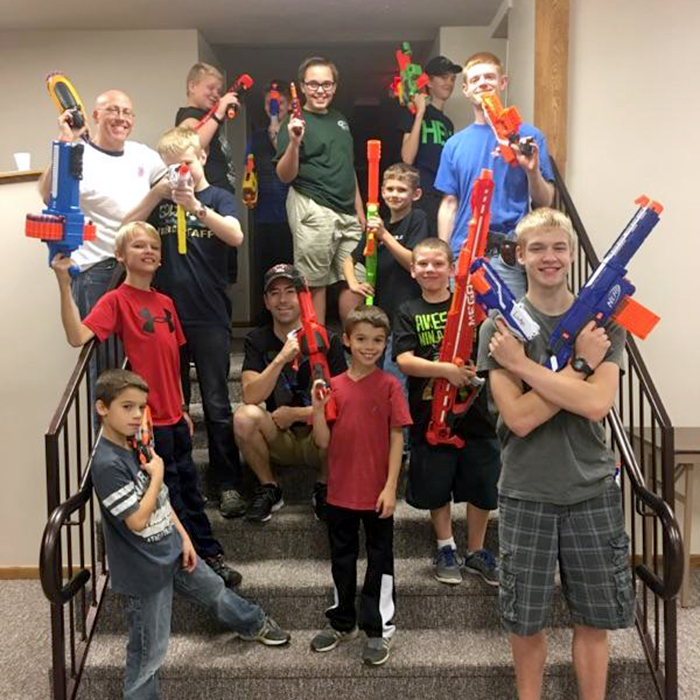 MASON CITY, Iowa—Fourth grade through sixth grade is a crucial time for spiritual development. The teachers at Faith Baptist Church want to influence boys of this age more than just on Sundays—and in a fun way, not just by teaching in a classroom. That’s why the teachers plan Nerf gun parties with these boys.

“It is so important to encourage these kids to pursue God in the choices and friendships they make now, that will guide their decisions in the future,” says Kyle Smith. “We enjoy spending time with the boys, and one activity we have found fun with them is Nerf gun parties.”

The boys form two teams and play until one team gets everyone out on the opposing team with the guns’ foam darts. That’s the traditional mode of playing, Smith says. But the boys have also played in many other game modes. One style is “capture the flag”: a team tries to take the opposing team’s flag and bring it to their own team’s base. The boys have also played using a “hostage” game mode: one player from each team is removed from the game, and both of the players become hostages; one team tries to rescue the hostages, while the other team tries to keep the hostages from being rescued.

“There is certainly an aspect of wisdom in choosing how much play time is had,” Smith says, because devotionals are also part of the event. After learning from God’s Word and eating pizza, the boys “play some more Nerf, and then we spend about 45 minutes picking up darts all over the church!”

Smith says, “God has blessed us with this age group and ministry, and we enjoy this service to Him.”