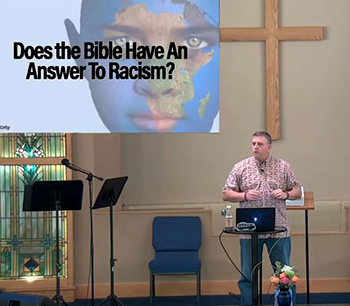 “How many different races of people exist around the world?” Carl asked the audience. “One, six, eight, more than ten? Or does the number not matter?”

Often people answer, “It doesn’t matter how many races there are.”

“I’ve got to tell you—it absolutely does matter,” he told attendees of the Spring Bible Conference. The answer, he said, is one. There is one race of people around the world: the human race.

“God’s Word is very clear,” Carl says. First Corinthians 15:45 and Genesis 3:20, he points out, clearly state that every person on this planet is related to two people: Adam and Eve. As descendants of Adam and Eve, “we are all image-bearers of Almighty God!” Carl says. “Therefore, any notion of superiority is ungodly.”

God’s Word also tells us “that we’re all of ‘one blood’ [Acts 17:26]. Yes, there are tribes and nations, but the Bible never talks about ‘races’ other than running a good race.”

Revelation 7:9 is “one the most inspiring anti-racism word portraits ever painted,” Carl says. In that verse the Apostle John describes Heaven after God allowed him a glimpse: “I looked, and behold, a great multitude which no one could number, of all nations, tribes, peoples, and tongues, standing before the throne and before the Lamb, clothed with white robes, with palm branches in their hands.”

“This is God’s best for the human race!” Carl says.

How can we stem the tide of racism? Carl asks. One way is “to educate people in God’s truth.”

“Every pulpit across this great nation should be preaching the gospel of Jesus Christ, and that includes love and impartiality. Our churches should be filled with people of all colors, sizes, and shapes, worshipping together as one. Let us proclaim loudly, ‘There is no place for racism in this world, and there surely will be no racism in the world to come.’”