Mothers and Their Daughters Enjoy Retreat at Camp Gilead 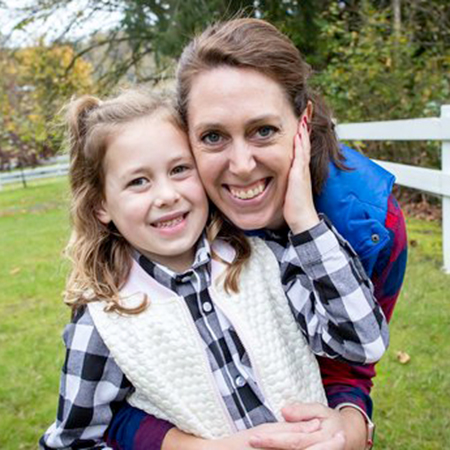 Each weekend, the camp had invited a mother and daughter to speak. Vicki Jones and her daughter Erin Sullenger spoke the first weekend, and Mary Beth Copper and her daughter Corin Engen spoke the second weekend. From both mother-daughter teams, the retreat attendees learned to be strong, kind, and brave.

Vicki, a mother of three and grandmother of eight, lives in Orting, Washington, where she taught preschool for 32 years. Now retired, she enjoys spending time with her family and church family, crafting, and volunteering in elementary school classrooms. Her daughter Erin, a mother of four, recently moved to her home state of Washington after serving the Lord in different avenues of ministry in Virginia, Florida, and California. She has a long relationship with Camp Gilead as a camper for 10 years and counselor for three, and she attributes much of her spiritual growth to her time there.

Courtney Jenison and her daughter Tori attend the mother-daughter retreat at Camp Gilead.

Mary Beth, a mother of five and grandmother of 18, is a registered nurse and has a fruitful ministry of helping people who face autoimmune issues. She has been a leader in women’s ministries throughout her life. Her daughter Corin, a mother of seven, is involved in women’s ministries in homeschooling and in her church, Emmanuel Baptist Church, Snohomish, Washington. She previously served in missions in Russia, Romania, and the U.S.

Two special people who attended the retreat were Courtney Jenison and her daughter Tori. The great-grandfather of Courtney’s husband started Camp Gilead seven decades ago. Courtney shared, “So 71 years ago, my husband’s great-grandfather (Forrest Johnson) founded a little camp in a sleepy little town in the Pacific Northwest. Tonight I’m sleeping in a cabin at that very same little camp with my daughter for our first mother/daughter retreat. Five generations of that man’s family have camped here now. You never know how far your actions will reach, even once you’re gone from this home, and the blessing of the richness of this heritage is not lost on me.”

Camp Gilead says, “We are thankful for the vision that Pastor Johnson had so many years ago—and the faithfulness of the Lord to bless and continue to use Camp Gilead for His glory.”