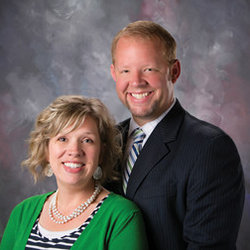 “Following the pattern of Acts 13,” says Pastor Ken Van Loon, “the service focused on the dedication of their lives to God’s service and care.” Pastor David Culver of Shawnee Hills Baptist Church, Jamestown, Ohio, spoke, challenging the church to pray for and support the Groeneveld family in their endeavor. Using the illustration of a rope, he emphasized that a missionary and the sending church both hold on to that rope to minister together for God’s glory and purposes.

The service “was a special day that will not be forgotten and which symbolizes the joint labor of local church and missionary in the work of God,” Van Loon says.


John and Tabitha say they are “an ordinary family with an EXTRAordinary God!” The couple both studied nursing at Pensacola Christian College, and while there, they went on a medical missions trip to Togo. After graduating, they served on two more short-term trips in Togo at Hopital Baptiste Biblique, a missions hospital affiliated with the Association of Baptists for World Evangelism. They also continued their education: John is now a nurse practitioner, and Tabitha is working toward earning a nurse practitioner degree.

They came back to the US in 2014 “with the intent to set roots” but soon desired to return to Togo as full-time career missionaries.

“We are completely confident that the Lord is calling our family back for long-term service,” the couple says. “We also have five wonderful children who are just as excited to return to Togo as we are!”

In Togo the Groenevelds will again be working at Hopital Baptiste Biblique. The couple says, “While at HBB, many times we are able to provide compassionate medical care that heals their physical ailments. But even greater is the opportunity we have to share with them the Gospel of Jesus Christ and touch their souls for eternity!”