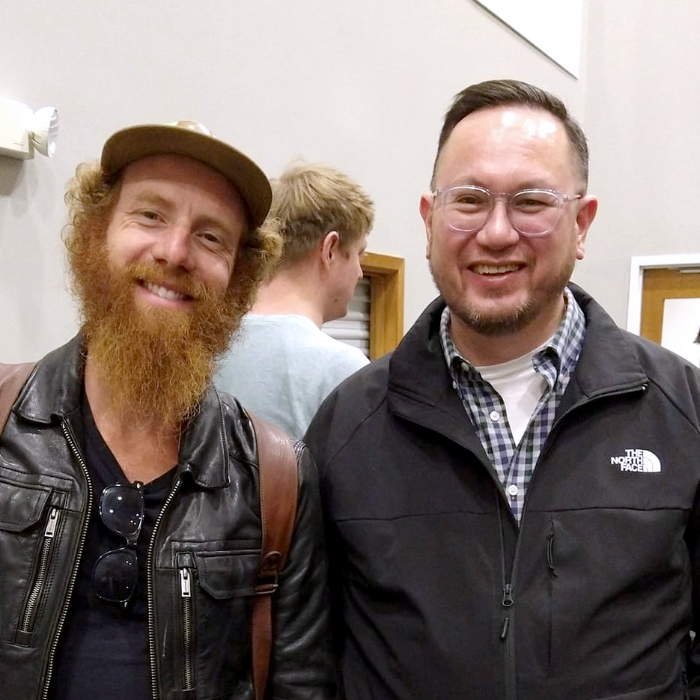 Known for songs such as “His Mercy Is More,” “Christ Our Hope in Life and Death,” and “Come Behold the Wondrous Mystery,” Matt has developed a reputation for writing songs that are theologically rich yet easily accessible and singable across a range of congregations, performance styles, and music settings.

This summer, churches across the GARBC will be blessed by Matt’s music, as he will lead worship at the 2022 GARBC Conference in Grand Rapids June 27–30.

At Calvary Baptist Church, Matt and guitarist Tyler Mount were met with a warm and enthusiastic reception from the audience, who stood for most of the 90-minute acoustic concert.

Matt “humbly and intentionally led us in worshiping our great Savior,” says Tim Moore, pastor of Faith Baptist Church, Mason City, Iowa, and a member of the GARBC Council of 18.

With Matt the audience sang several songs from his new album, Almost Home, recorded with frequent collaborator Matt Boswell. Also included in the evening’s repertoire were familiar hymns, including “The Solid Rock,” “Nothing but the Blood,” and “There Is a Fountain.”

“It was a great time of worship, singing about the majestic truth of Who God is,” says Will Hatfield, pastor of CrossRoad Baptist Church, Ames, Iowa.

Greg Linscott, pastor of Calvary Baptist Church, says “Matt’s evident love for God is reflected in his writing and performance. I was left rejoicing in the God Who is faithful to His promises.”

Greg’s daughter Dori was part of a group of students from Faith Baptist Bible College who attended. She appreciated Matt’s interaction with the audience and says he “was very personable and spontaneous.”

Matt not only displays energy in his music but also includes quieter moments “that make us absorb and internalize every word from the pieces,” says Dori’s classmate Cesar Gutierrez. Before the concert, Matt drafted Cesar, who plays the violin, to accompany him on his song “His Mercy Is More.”

For those attending, the worship concert was both a blessing and an encouragement. Bill Smith, a member of Calvary Baptist, says, “It was a great night of singing together, praising our great God!”