Pastor Scott Poling of Harvest New Beginnings and his 17-year-old son, Dawson, served in Rwanda with a ministry that trains leaders in remote areas. 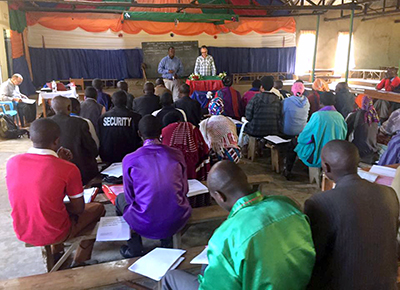 OSWEGO, Ill.—Pastor Scott Poling of Harvest New Beginnings and his 17-year-old son, Dawson, served in Rwanda June 8–19. They accompanied Rich Howard of Tri-M, a ministry that trains pastors, their wives, and other ministry leaders in remote areas. Rich and his wife, Richelle, served as pastor and wife at Village Baptist Church, Aurora, Illinois, from 1988 to 2009, when they began ministering full-time with Tri-M.

“The African country of Rwanda unfortunately is known for the genocide that ravaged its land in the 90’s,” says Chris Hindal, director of Regular Baptist International. “But praise God for the help of Evangelical Baptist Missions,” which began a program in 1997 called Mobile Modular Ministry, or Tri-M, to train leaders in Africa. Evangelical Baptist Missions closed in 2011, but missionaries and church leaders continued the ministry of Tri-M. Today Tri-M trains leaders in not only Africa but other developing nations. The program’s long-range goal is for people the team trains to, in turn, train others. “I’ll train thirty men, then they go back to their thirty churches and train their leadership teams with the same material,” Rich says. 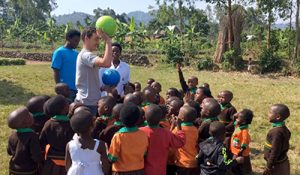 During the trip, Scott and Rich traveled 6,500 feet into the mountains to teach and encourage pastors and laypeople at one of Tri-M’s locations. Meanwhile, Dawson worked with preschoolers in a classroom and on a sports field in the village of Mahoko. Last fall, Harvest gave $10,000 to construct a building for the newly planted Mahoko Baptist Church, affiliated with Evangelical Baptist Churches of Rwanda, a partnering association of Regular Baptist International. On June 11, Scott preached during the dedication service for that church’s building while Emmanuel Ndolimana, general secretary of the Evangelical Baptist Churches, translated.

“What a thrill it was to take part in this ministry of multiplication!” Scott says of the Tri-M ministry. “The people may lack food, clothing, electricity, and indoor plumbing, but they have a vibrant love for Jesus that is contagious and overflowing!”