Ministry in Haiti Not a Onetime Deal

When a seven-member team from Cornerstone Baptist Church returned from a missions trip to Haiti this summer, they came back with a greater awareness of needs and opportunities, and on fire for God. 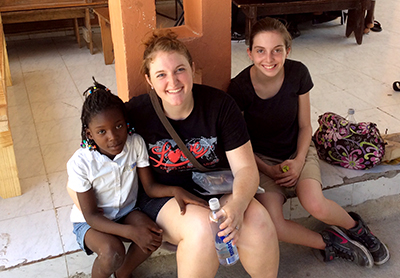 LAKELAND, Fla.—When a seven-member team from Cornerstone Baptist Church returned from a missions trip to Haiti this summer, they came back with a greater awareness of needs and opportunities, and on fire for God.

The team, comprised of people ages 14 to 70—students, professionals, and a retiree—went to Haiti to work with missionaries Ken and Andrea Taylor. The team’s ministry included building benches, assisting in the Taylors’ medical clinic, conducting a one-day VBS, and fellowshipping with Haitian believers in local churches.

The benches were for a community referred to as Canaan, one of the largest refugee areas set up after the 2010 earthquake. Pastor Jeff Malin of Cornerstone Baptist describes the “neighborhood” as made up of hundreds of small homes built with tarps and tin sheets, where the necessities of life are scarce. Children in Canaan receive no formal education. But they sat on those new benches to learn about Jesus as a missions team brought Vacation Bible School to them for a day. Every Saturday, several young Haitian Christians go into Canaan to help meet physical needs while sharing the greater need—forgiveness of sin and the gift of eternal life through Jesus Christ. These young men are so fired up about God and the gospel that they spend 50 percent of their income on their ministry in Canaan.

In the community of Delma 33 in Port-au-Prince, Ken and Andrea run a medical ministry. The Cornerstone team saw this ministry in action when a little boy arrived, brought in by his grandmother. “I thought he was a burn victim,” says Malin. However, the tot was suffering from malnutrition. “He had a rag for a T-shirt and no diaper or pants. His skin was flaking off his body, and he was missing a fingernail that had probably fallen off.” Unable to meet his needs, the medical team took him to a hospital. God used that little boy, says Malin, to burden the Cornerstone team about the tremendous needs in Haiti.

On a more uplifting note, team members were privileged to participate in revival services, where 200–250 people gathered on a Friday and Saturday to hear Malin preach on redemption. Worshiping with the Haitian believers was an experience the team won’t forget. People started arriving 20–30 minutes before the services to sing and praise God. The official services included 75–90 minutes of singing followed by 45–75 minutes of listening to the Word of God preached. “Their passion for Jesus Christ is truly contagious,” says Malin, “and their hunger for the Word of God is refreshing.” Even their breaks between services included singing. Most impressive—they did this with no air-conditioning, sitting on wooden benches for two to four hours!

For Cornerstone, this was not a one-shot deal: Pastor Malin is considering how he can help train Haitian pastors; other team members are considering internships with the Taylors; and the church will continue to provide necessities like shoes, clothing, and school supplies.

Next post The Dangers of the Celebrity Pastor Syndrome