“Imagine switching the lid of a jigsaw puzzle box and then trying to figure out how to put the pieces together while using the wrong picture as the template.” Speaking in two main preaching sessions, Dr. Gary Gilley used this word picture to illustrate the challenge that many in mainstream evangelicalism face when attempting to define spiritual formation. 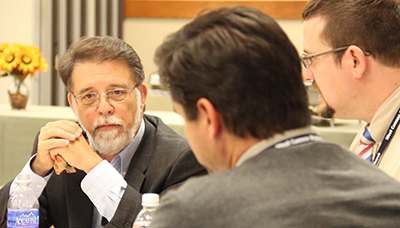 BELMONT, Mich.—“Imagine switching the lid of a jigsaw puzzle box and then trying to figure out how to put the pieces together while using the wrong picture as the template.” Speaking in two main preaching sessions, Dr. Gary Gilley, pastor of Southern View Chapel, Springfield, Ill., used this word picture to illustrate the challenge that many in mainstream evangelicalism face when attempting to define spiritual formation.

What defines spiritual transformation and how it is demonstrated in daily life was the prevailing focus of a joint conference Oct. 20 and 21 focusing on the theme “Metamorphosis.” The Michigan Association of Regular Baptist Churches combined its annual conference with the annual Pastors’ Seminar of West Cannon Baptist Church, Belmont, Mich., located near Grand Rapids. The conference was the second joint venture by the MARBC, which last year partnered with its counterpart, the Ohio Association of Regular Baptist Churches, in Toledo, Ohio. (Read “Standing Together for the Gospel.”) Conference attenders came primarily from MARBC churches and partnering ministries, and from independent Baptist and Bible churches, to focus on the conference theme.

Using Colossians as the foundation for his messages, Gilley emphasized the necessity of knowing Who Christ is and what Christ has done in order to properly grasp what spiritual transformation will look like in the life of the Christian. “The challenge of Christianity is approaching the Bible like a buffet, where every person goes through the line and picks what they want.” Gilley pointed to the emphasis of the Apostle Paul in Colossians 2 regarding the critical necessity of “going to the correct mine in order to find the appropriate treasure” rather than pursuing the “fool’s gold” of false teachings or legalism.

Dr. Gilley has served on the pastoral staff at Southern View Chapel as associate and then senior pastor since 1975. He is noted for writings related to the purity and focus of the local church through his books This Little Church Went to Market, This Little Church Stayed Home, and This Little Church Had None. Out of Formation, his newly released book, was one of two gift books given to conference registrants. Gilley also publishes “Think on These Things,” a monthly newsletter devoted to theology, current events, and book reviews.

In addition to his main session messages, Gilley also presented two seminars: “Spiritual Formation: What Is It?” and “Cessationism.”

Commenting on Gilley’s messages from Colossians, host pastor Doug Crawford of West Cannon Baptist Church stated, “Gary’s messages were excellent and challenging. He drove home the danger of basing our spiritual identity upon anything but the foundation of Scripture when he declared, ‘How sad it is that under the banner of evangelicalism people are looking to monks, hermits, nuns, and priests for guidance in spiritual formation.’”

Ken Floyd, MARBC executive director, observes, “I appreciated Gary Gilley’s strong emphasis upon the Word of God as our sole authority in life and ministry. How convicting was his challenge, ‘A polluted or partial revelation by the Holy Spirit has never been uttered. . . . Do we, as believers in sola scriptura, and Biblical sufficiency, take our marching orders from the written Word, or do we look to the ‘white spaces’ in Scripture to determine how we live?’”

Joining Dr. Gilley as a keynote speaker was Dr. Voddie Baucham, pastor of preaching at Grace Family Baptist Church, Spring, Texas. Besides his ministry at his home church, Baucham is also a noted conference speaker and author. His newest book, Joseph and the Gospel of Many Colors, was given to those in attendance.

Dr. Baucham preached his Monday evening message, centered on the topic of Biblical manhood and male headship, to a large gathering. Beginning with the creation of the First Adam in Genesis 2:15–25, Baucham emphasized God’s pre-Fall focus upon a man and his work, a man and his worship, and a man and his wife. (See related men’s Bible studies published by Regular Baptist Press; Ken Floyd is author of the book Men at Play.) He then utilized Paul’s letter to the Ephesians to reveal how the Second Adam gives the ultimate example to a man of how to love his wife and, by doing so, present her as a fragrant aroma to Christ, saying, “Here she is, Lord; this is the way that I seek to honor her.”

Doug Crawford commended Voddie Baucham before introducing him in a Tuesday session, saying, “Voddie, you not only articulated a theology of Biblical manhood so that we could understand what it means to be a man, a husband, like the God Man Jesus Christ, you also modeled for us the power of the Word of God rightly divided.”

Voddie Baucham used both of his speaking sessions on Tuesday to address issues pertaining to homosexuality from a Biblical perspective. Observing that the pressing moral issues for today’s culture are debt, abortion, and same-sex marriage, he said, “The culture will have to decide whether or not it will be okay for the church to violate the ‘civil rights’ of homosexuality, or if churches will be legally told it cannot preach the whole council of God.” Further observing that words have meaning and that ideas have consequences, he declared why he believes Biblically that same-sex marriage is not a civil rights issue. “Homosexuality is not a ‘life-style’ but a ‘death-style,’” Baucham emphasized, quoting several statistics that note the high rates of sexually transmitted diseases, promiscuity, domestic violence, alcoholism, drug abuse, depression, suicide, and the decreased life expectancy of 20–30 years among practicing homosexuals.

For those who claim that Jesus never addressed homosexuality in His earthly ministry, he pointed to Christ’s statements in Matthew 5 and 19 pertaining to the Biblical term pornea (“fornication”), which includes homosexuality. He emphasized that Genesis 2:24 and 25 declare that the purpose of marriage is for procreation, illustration, and sanctification. Jesus then reiterated this principle in his own teaching in Matthew 19:3–6. Baucham also aptly reminded those in attendance that, as a member of the Godhead, Jesus was present at the judgment of Sodom and was a cosponsor of the book of Leviticus and its statements condemning immoral and ungodly practices such as homosexuality.

Embracing summary declarations by both speakers, conference participants left renewed in their fervor to stand true to the all-sufficient Scripture. They should seize their God-given opportunity to address these important issues from the pulpit, in evangelism, and in the media, with the goal of always declaring the gospel and, if necessary, to suffer well.

All messages from the conference will be available in audio form in early November and posted at www.westcannon.org and www.marbc.net.