Men for Christ celebrated its 20th anniversary with a three-day event at Iowa Regular Baptist Camp. 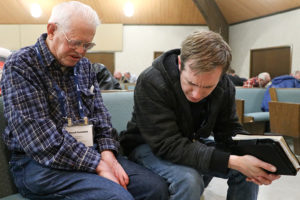 VENTURA, Iowa—Men for Christ celebrated its 20th anniversary at its annual rally, this year held at Iowa Regular Baptist Camp.

Men for Christ began in 1998 in the Midwest “to reach men of the twenty-first century with the gospel of Christ and equip them to serve in ministry.” Each year, Men for Christ holds a rally in Iowa, Illinois, Wisconsin, or Minnesota. To mark its anniversary, the ministry decided to hold its 2018 rally at Iowa Regular Baptist Camp, with the event lasting three days, March 22–24, rather than the usual two.

The theme “Moving Forward: From a Firm Foundation” challenged the men in their personal lives, family life, and ministries. The theme served as a restatement of Men for Christ’s “founding purposes of support and encouragement for local Baptist churches and pastors,” says Thorin Anderson, president of Men for Christ and a speaker at the rally. The event’s website further explains the theme, saying that “Jesus Christ is our firm foundation, and upon that foundation is built everything else for which men of Christ should strive.”

“The camp setting and workers provided a great environment for the men,” Anderson says. “Men for Christ’s board and the attendees were grateful for the warm servant spirit of the camp staff and Director Phil Betz, who went out of their way to facilitate the rally.”

Men for Christ invites men from across the Midwest to next year’s rally March 28–29 at Ashburn Baptist Church, Orland Park, Illinois.

Next post Men For Christ Marks 20 Years of Ministry