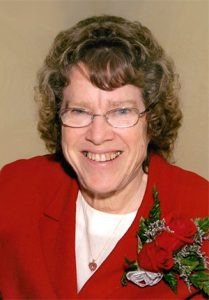 NAPERVILLE, Ill.—Karen Boersma, a pastor’s wife and missionary, died Aug. 29. She was 76.

She is survived by her children Vern, Mark, Kerry, Daniel, Kenneth, and Kimberly; 21 grandchildren; and six great-grandchildren.

Posted in Ministry Highlights, With the Lord on September 2, 2016.

Next post Fort Ashby Church Rebuilds After the Fire