Jerry and Jo Cudney received the Outstanding Service Award from Corban University, Salem, Ore., at the school's homecoming celebration Oct. 2–5. The Cudneys are 1963 graduates of Corban. Jerry is assistant to the pastor at First Baptist Church of Eastgate in Bellevue, Wash. 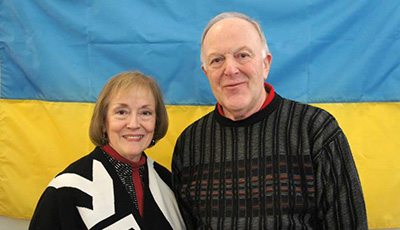 BELLEVUE, Wash.—Jerry and Jo Cudney received the Outstanding Service Award from Corban University, Salem, Ore., at the school’s homecoming celebration Oct. 2–5. The Cudneys are 1963 graduates of Corban. Jerry is assistant to the pastor at First Baptist Church of Eastgate in Bellevue, Wash.

After graduating from Corban, Jerry served as pastor of education at Cedar Avenue Baptist Church, Fresno, Calif., from 1963 to 1966 and then Northland Baptist Church, Grand Rapid, Mich., from 1966 to 1972. In 1972 he became pastor of First Baptist Church of Eastgate. “During those years,” Corban says, “the church tripled in attendance, the missions and music programs grew, families were discipled, and the church became a hub of ministry. Many came to Christ as the result of the evangelism emphasis.”

In all of Jerry’s ministries, Jo has been involved in the children’s, music, and women’s ministries and spoke at regional retreats and banquets.

The Cudneys left First Baptist in 1982 but would ultimately return two decades later.

Jerry went on to pastor First Baptist Church, Woodland, Calif. (1982–1984); Southcenter Community Baptist Church, Tukwila, Wash. (1984–1986); and Maranatha Baptist Church, Isaaquah, Wash. (1986–1992), which he planted with 13 other people. A congregation of 13 people would probably not provide sufficient income for the Cudneys, Corban relates, so Jerry learned the business of real estate, allowing the couple to continue in ministry.


In 1995 the Cudneys began representing the Association of Baptists for World Evangelism west of the Rockies. First Baptist became their home and sending church. And when they retired in 2005, they returned to that church, but the pastoral roles reversed. Jerry is now assistant to Pastor Brad Kolbo, who was associate pastor when Jerry served as pastor of the church in the 70s.

Jerry and Jo Cudney say, “All of our ministry accomplishments would mean nothing without our family being a part of the ride. Our four daughters, Carin, Jerilynn, Amy, and Jill, are to be thanked for all they have done to support and encourage us.”