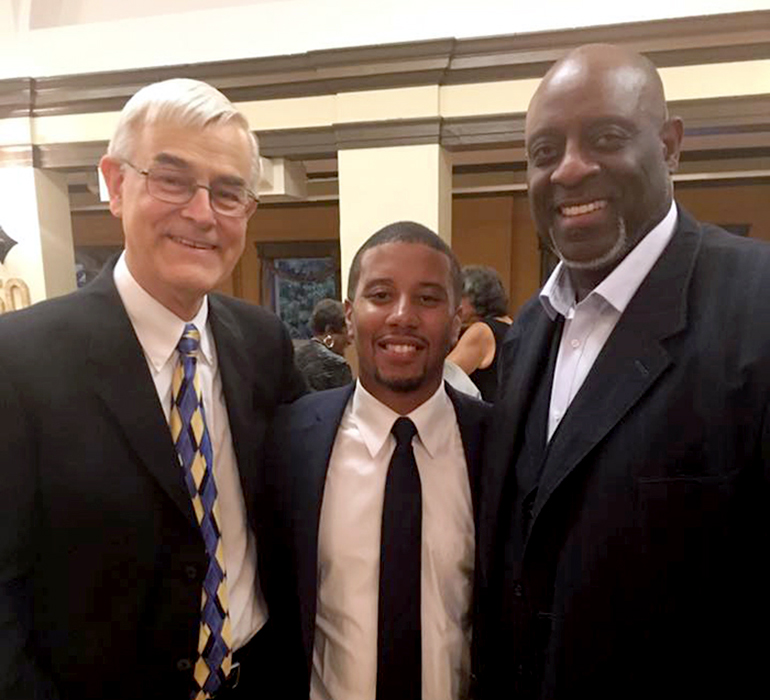 INDIANAPOLIS, Ind.—Trinity Baptist Church celebrated its 50th anniversary with a weekend filled with “reflection, reunion, and inspiration as the church gathered in praise over the faithfulness and grace of our Lord,” says Pastor Gordon Rowe.

Dr. Robert Anderson, pastor of Trinity Baptist from 1982 to 1998 and now pastor of Colonial Baptist Church in Randallstown, Maryland, spoke at the celebratory banquet on Saturday evening, Sept. 16. John Greening, GARBC national representative, also attended and shared words of encouragement with the congregation on behalf of the GARBC.

The banquet, Rowe says, “was one of great joy, as members and friends who have been impacted by the ministry of Trinity Baptist Church over its life were in attendance and given opportunity to connect with those in which they had not seen in many years.”

In attendance were missionaries Frank and Alice Gainer, longtime members of this church. Frank is the founder of MacroMicro Enterprise

Development, which helps ministries in developing nations become sustainable without depending on donations. Trinity Baptist gave Frank and Alice a plaque recognizing their long-term commitment to church ministry.

Additional missionaries and former pastors participated in festivities throughout the weekend. Dr. Ken Davis pastored Trinity Baptist from 1976 to 1982. During Sunday School, he presented his work of planting churches through Project Jerusalem, a ministry of Baptist Bible Seminary. Dr. Erskine Dodson pastored Trinity Baptist from 2001 to 2014. During the Sunday morning worship service, he presented his work of training pastors and leaders locally and abroad through Tri-M (Mobile Module Ministry). Dr. John McNeal Jr,. the first missionary that Trinity Baptist Church supported, is now founder and pastor of Atlanta Bible Baptist Church, Decatur, Georgia. He shared a stirring sermon during the morning worship service.

Trinity Baptist Church is located in an urban area on the east side of Indianapolis. In 1968, the year after the church began, it became the first predominantly African American church to be accepted into the GARBC. Rowe says, “Please consider Trinity Baptist Church of Indianapolis in your continued prayers, not only in celebration of what the Lord has done these past 50 years, yet also in anticipation of what He may continue to do through this body for years to come.”